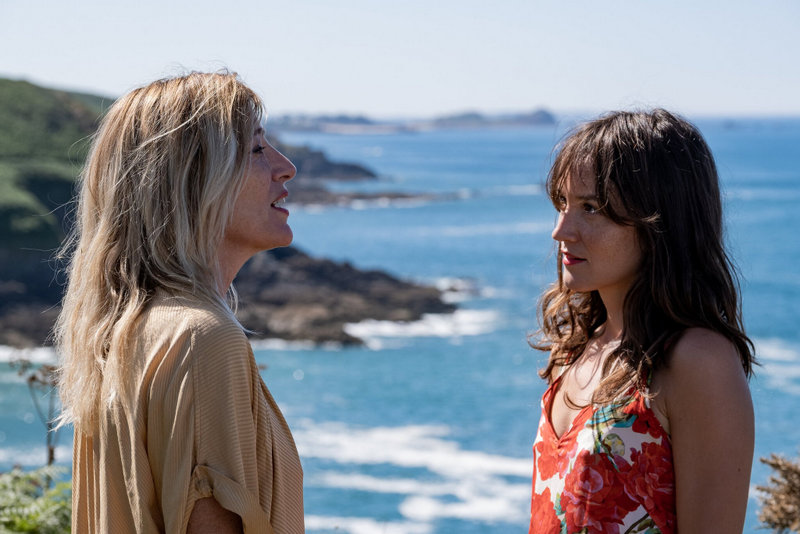 In the distant past – well 1973 to be precise –  the drink’s company Dubonnet… the ‘pleasure for sharing’ had a celebrated TV ad, filmed by the now-controversial, but then celebrated, British photographer David Hamilton (1933-2016).  To the beautiful evocative strains of the ‘Bailero’ from Joseph Canteloube’s Songs of the Auvergne young girls, probably too young to drink, cycled through beautiful countryside.  It all seemed to be some sort of dreamy romantic French idyll, the ambience, the music, that certain je ne sais quoi.  Well, there is a touch of that here – a teenage-like heroine – the literary pretensions, the evocative street settings, and of course breasts and nipples in abundance,  It could only be Planet France.

A young scatterbrained Anais is clearly unhappy with the men in her life.  In something of a coup de foudre, she is smitten by the much older, but also improbably beautiful, wife of her occasional mature male lover. And essentially she expends all her time and effort in the act of seduction.  The directorial argument implies a young woman discovering her true self in the arms of a mature woman.   A recognised literary figure, and clearly a darling of the literary festival circuit, the mature woman likewise discovers herself.  It is not without charm and the acting is up to the task at hand but whether it is comic is debatable.  It is worth reminding ourselves that there is that recurring strand in films of this type where sex is only for the beautiful.  Literary luvvies rollicking in the sand like some take on From Her to Eternity (1953) is appealing where semi-literates from the local chip shop might be uncomfortable, or maybe not.  David Hamilton, near the end of his life, was accused of the rape of young girls – the very subjects of his arguably soft-porn photography.  We are reminded of the Degas-like quality of the mature male gaze on nubile females.  The mature female gaze on the testosterone-led younger male upsets many, it seems. Some viewers seem to have been traumatised by Emma Thompson baring her all in Good Luck to You, Leo Grande.  But in our complex culture, an older woman and a younger woman is discovery, empowerment and liberation.   It is true that love and sexual attraction can arise at any time and at any age – what is missing here is the fact that for all her beauty, the key character is utterly selfish, self-obsessed and manipulative.  Her beauty may easily awake long-repressed desires but any long-term relationship would be traumatic indeed.   Perhaps a Part II will provide a more substantive and meaty interrogation of an age-gap romance.