This is no tale of a Crawford versus Davis rivalry. Though stoked by the Press, Deanna Durban always said Judy Garland was her friend and Melanie Gall should know- she has just written a book on the friendship and the life of Durban.

For this hour, we are treated to a scenario where Durban, who retired from global fame in her late 20s is discovered in her Parisian home by a journalist wanting the real story of this ’rivalry’ following Garland’s untimely death.

Gall tells a warm story. Durban never compared herself to the talents of her studio ‘backlot’ school friend Judy Garland, though Garland appears to have felt the rivalry in her driven and competitive career.

Gall peppers her plot with excerpts of music that Durban was renowned for and that made her a global star in the 30s and 40s. The only issue I have with the delightful piece is that these were excerpts and not the full rendition, but Fringe timelines are strict and she had a lot to pack into her interesting story.

Gall produces a beautiful and informative free programme and is a one-person production house. The show is very well presented, well written and the music is properly rendered. You will learn a lot about her subject matter while being reminded of the quality and standard of Durban’s musicianship.

Garland was swallowed up by the industry she entered as a child, Durban got out and survived, leaving a glorious vocal legacy for generations to enjoy. 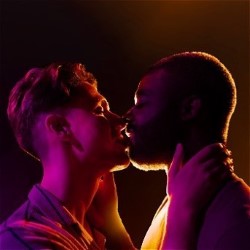 ‘Wreckage’ is powerful. Written by Tom Ratcliffe, it is one of the finest pieces of theatre in the Edinburgh Fringe. Ratcliffe has been to Dublin with his solo show ‘Velvet’ at the 2019 Dublin Gay Theatre Festival. ‘Wreckage’ is another huge step in his development as a playwright and actor.

What a beautifully teased-out plot packed with tensions and emotions. Noel (a force in Michael Walters) is a diner in a restaurant where Sam (Ratcliffe) works. Noel is older than Sam, but life and love work so well for them. Noel not only has the patience for the more emotional Sam, but has all the space for him to blossom. And Sam does blossom on his own terms.

The relationship has its ups and downs, but the pillars of love and mutual support only crumble when fate intervenes. It is no one’s fault. What unfolds is a dramatic tapestry of memory, need, loss and growth in an engrossing hour-long of high emotion theatre.

Peppered with the presence of former lovers, Mum, and Christian all of whom impact on Sam as he struggles and succeeds in building a new life into maturity. Noel is ever-present. Sam needs that and they walk together on life’s road at times of joy and challenge.

There is not an unnecessary word in this beautiful text. The acting is riveting. The diction, emotion and togetherness of this acting partnership, drive the beautiful text within Rikki Beadle Blair’s intelligent and strong direction. Add in great graphics and stage setting and it all blends so well into riveting theatre – Harlow Playhouse, take a bow!

If you fail to see this play, you will fail to understand how important a contribution Fringe theatre can make to the artform. 60 minutes of real artistry. Bravo!

The Not So Ugly Duckling Show: A Play for Grown Ups

The Scottish Storytelling Centre has one of the best stage facilities available to Fringe groups. This play written and performed by Jo Clifford and Maria Mac Donnell was quite an innovation. With a minor tweak, this play would also be very suitable for the younger generation too.

Hans Christian Andersen’s tale of how difference is rejected because people don’t see the beauty inside has stood the test of time. Jo Clifford posits their role in their story through the eyes of a trans actor. They are beautifully partnered with the energetic and affable Maria MacDonnell whose many roles drive the energy of the piece.

MacDonnell has a great pace and connects warmly with the audience. Clifford would do well to feed a little more from that bright pace and delivery. Emphasis can be achieved in many different ways and as the ‘duckling’ is the young(er) one, despite the oppression around, a faster or more varied delivery would have ensured this tale zipped along even better.

That being said, it is a minor observation in the light of the great onstage warmth this stage partnership exuded throughout. Director Ian Cameron and Set and Costume Designer Ali Maclaurin with the rest of the tech team gave us a most appropriate and charming setting for this adult tale. The presence of a BSL interpreter added greatly to the audience’s enjoyment.

It is no surprise that this Andersen story resonated with Clifford’s life experience. Their dignity and courage to present this story with such directness and polish was another strong sub-text for the audience. It certainly not only gave a context to Andersen’s lessons today, but it was an ideal tool for Clifford and MacDonnell to make the points on acceptance and transition that need to be heard by all. How good it is to see the Scottish Storytelling Centre programme this and Kate Taylor to produce it. It deserved to be seen and heard.

Bluewater is a short thirty-minute treat written and performed by Grace Quigley. She recreates the teenage cusp from child to adult with innocence, humour and rebellion. Directed by Jess Coppen Gardner, this short tale is full of warmth, wit and energy.

The boys in school are on the hunt and as is expected, she and pal Lulu prepare for the big party with precision and ambition. Freddie has made his plans and despite her hopes for a new connection with him, someone else catches her eye. It’s a revelation and an acknowledgement of what she always knew about herself.

She wrestles with the messages from a bigoted childhood. She becomes very politically aware and the journey to her adult self is achieved with passion and pride.

Quigley was totally at home in her script. Her humour resonated with her audience of peers and the half hour flew by far more seamlessly than an adolescent journey. A nice treat at 11.00pm.

A few years ago I attended a beautiful play by Glaswegian playwright James Ley called ‘Lovesong to the Lavender Menace’ about a LGBT bookshop closing in Scotland. I loved it. Nothing could be a greater contrast in subject matter than this, his latest work.

Summerhall is a brilliantly innovative and inclusive venue but its worst space is the demonstration lab, a tiered lab from the 40s or 50s that is so acoustically live, sound bounces everywhere and the wooden tiered seating was designed to keep students awake!

That being said, the actors used mics and the balance between the dialogue and the onstage DJ was as good as it could be. The audience is provided with a glossary of gay sex and drug terminology on the way in and we find ourselves in a funny and graphic story of nerdy Gordon’s coming of age in the gay sex parties and clubs from Scotland to Berlin.

Ley writes funny scenarios and sharp lines, beautifully delivered by our larger-than-life narrator ‘Manpussy’ ( a towering Marc MacKinnon). His eloquence and camp timing drive the piece. Brian Evans ‘Gordon’ is not to be underestimated – his slight frame disguises a clever and energetic performance. ‘Cumpig’ (Sean Connor) has a heart and a likeability despite his mad adventures. And this play has a mad streak throughout.

There are lots of described sex, drug and tripping. There’s a lovely subtext of politics from an independent Scotland rejoining the EU to the integration of LGBT issues in government workplaces.

It is a mad story when a rendition of Riverdance almost steals the show. ‘Ode to Joy’ is well performed, pushes Ley’s writing and direction onto a new trajectory and clearly shows his repertoire has yet to establish a boundary…and I doubt it will.

Not for the faint-hearted… but your heart will pump up a gear throughout. In a Fringe where good plays have struggled for audiences, this play has two extra performances scheduled in a bigger Summerhall venue on the 24th and 26th and from the audience response – that’s no surprise.