All The Angels: Handel And The First Messiah – Smock Alley – Review

All The Angels: Handel And The First Messiah – Smock Alley – Review

This is not a Christmas story! If you’re looking for stories of orphans, wicked stepmothers and yuletide magic, try one of the other theatres around Dublin. This is the story of German composer George Frideric Handel and the period leading up to the first performance of the Messiah, which occurred on the 13 April 1742 in The Great Music Hall on Fishamble Street in Dublin. The original theatre is long since knocked down but the site is less than a hundred metres away from Smock Alley, so it is quite fitting that the play has arrived in this particular theatre.

The play is written by English poet, screenwriter, and playwright Nick Drake and was first performed in the Globe Theatre in Bankside, London in 2015. The story is loosely based on fact, as there are a number of unusual stories and characters associated with the original performance. The main storyline involves Susannah Cibber (Rebecca O’Mara), an actor who left London under something of a cloud due to her scandalous behaviour. Due to a lack of singers of sufficient quality in Dublin, Handel (Brian Doherty) takes the actress under his wing and decides to train her to perform at his first Messiah. What follows is a series of meetings between the two where they discuss music and performance. While it does sound like a variation on My Fair Lady, it is actually more complex as it explores the deepening friendship between the two. There are also a number of side stories, with characters like Crazy Crow, Charles Jennens and Cavendish (all played by Ross Gaynor).

The stage is covered in mirrors and glass, adding the illusion of depth to the small stage. There is even a raised platform that looks more suited to a nightclub than the theatre, but somehow it all makes sense.

There is also, as you would expect, a musical element to the proceedings, with three singers on stage (two on the night of this review due to the illness of Owen Gilhooly-Miles). Soprano Megan O’Neill and Tenor Ross Scanlan add various musical interludes, as they perform sections of the Messiah. They are also involved in the triumphant concert that concludes the performance. Musical Director Helene Montague is the only constant on stage, as she accompanies the various singers on keyboard.

The production feels large despite having only three main actors on stage, along with various musicians and singers. The plot has a surprising number of strands and ideas. Some elements of the script felt unresolved, as minor characters are introduced and not developed further. It is possible the writer carried out too much research on the period and wanted to fit in all the various aspects, but the main storyline is strong. The cast is impressive with Brian Doherty playing the composer with a tough, stuffy exterior and a heart of gold. Ross Gaynor plays a wide range of parts showing his versatility as he moves between Dublin scamps and Lords of the Manor, while Rebecca O’Mara adds warmth and compassion to the character of leading lady Susannah Cibber who attempts to expand her horizons.  It’s a production that offers an alternative to the traditional Christmas tales, and for that alone it’s a most welcome addition. 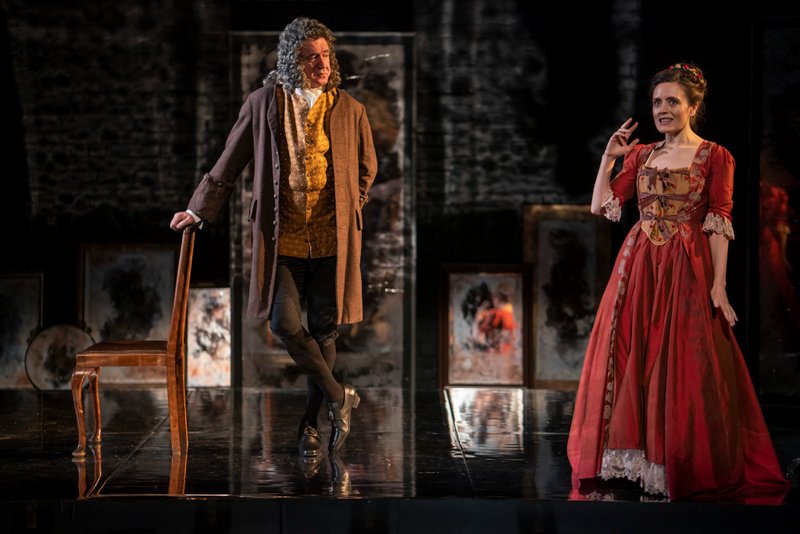