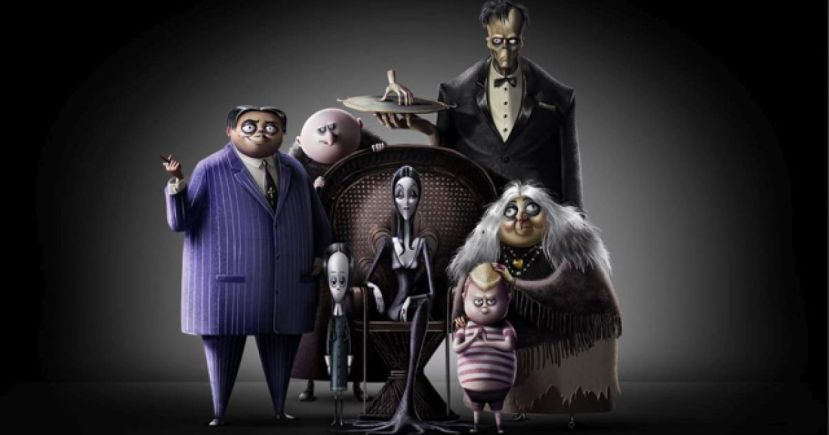 I’m going to assume that everyone reading this is familiar with The Addams Family in some capacity whether from the oft repeated1960’s TV show, the hugely popular movie series, the stage musical or even the original comics. The characters are so iconic that they are frequently parodied in popular culture and a quick glance around any Halloween costume shop shows many variations on their iconic look (of course for copyright reasons they have names such as Midweek Child costume instead of Wednesday Addams!)

This latest incarnation of the creepy and kooky, mysterious and spooky family saga forgoes live action for animation but boasts a stellar voice cast. Beginning with Gomez and Mortica’s wedding day they are run out of town by an angry mob (very reminiscent of scenes in James Whales classic Universal creature feature Frankenstein) and they flee to New Jersey where they set up their home.

Fast forward thirteen years and a reality TV Host Margaux Needler (Janney) decides that the Addams aesthetic and attitude doesn’t fit her plans for a perfect community that she is building so she determines to rid the town of them. Obviously, the Addams don’t take this lying down leading to an ensuing war with the town.

One of the things I always loved about the Addams Family is that it was quite dark. However, this offering is almost frothy in its approach. While the star studded cast do a great job (particularly Theron and  Janney) the movie always just feels a little bit – lightweight!

Since this is a family movie there are lots of messages about accepting others even though they are different to you, accepting ourselves, the importance of family…and it all feels a little contrived. The 60’s TV show managed to get all of this across but in a more deliciously melodramatic and gloomy fashion – while always remaining humorous.

Of course many kids won’t be familiar with the show and perhaps haven’t been exposed to the live action movies yet so this will be their introduction to the ghoulish but loveable clan. And there is definitely much for them to enjoy here. The animation allows the larger than life characters to express their personalities in a way that even the best special effects don’t allow in live action and it is extremely eye catching.

Overall, this is a fairly rote story and a tame handling of classic characters who have so much more to give. However, for a family half-term cinema trip it should keep everyone happy.