On Saturday April 22nd, a fundraiser and special screening of the documentary Astral will take place at The New Theatre in Dublin’s Temple Bar.

The film focuses on Spanish journalist Jordi Évole’s journey aboard a luxury vessel donated by a millionaire to Proactiva Open Arms, a non-governmental organisation from Spain whose main mission is to rescue refugees from the sea arriving to Europe fleeing war, persecution or poverty. The NGO began their work on the beaches of Lesbos in 2015 and has already saved more than 6,500 lives off the Libyan coast. 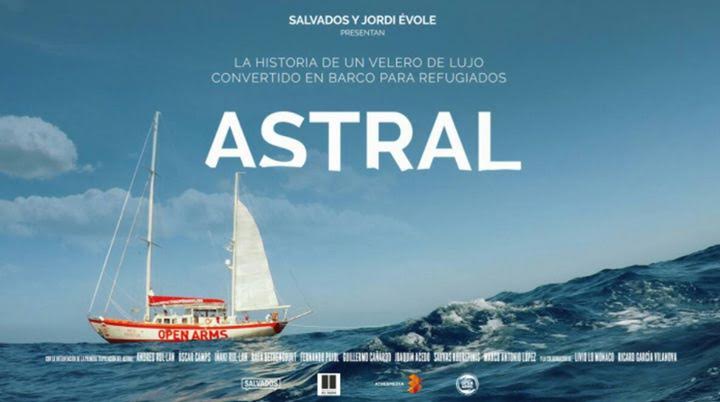 The screening will be followed by a panel discussion with Caoimhe Butterly (Resilience Beyond Borders), Caroline Reid (Irish Refugee Council) and Kyle Phiri (Movement of Asylum Seekers in Ireland). The discussion will be chaired by lecturer and journalist Roisin Boyd.

The event will be hosted by Fernando De Juan, a Dublin-based film editor. No stranger to film screenings, he co-founded Ireland’s Film QIub in 2010, a monthly film club dedicated to curating and showing LGBT cinema to Irish audiences. Fernando talked to No More Workhorse about the film’s importance and what he hopes people will take away from the screening.

How did you discover this film?

As a film editor I have worked on documentaries about human rights in the past and it’s always been a passion of mine. I follow the journalist Jordi Évole on Twitter who is also one of the directors of the film so this is how I discovered the film.

The film was shown in Spain for only one day to raise funds for the NGO Proactiva Open Arms. I contacted them to see if I could buy a copy of the film so I could watch it in Ireland. They kindly sent me a copy of the film for free.

What struck you about the documentary that made you want to bring it to Irish audiences?

It is a very powerful film that follows a group of human beings helping other, human beings who are in a very desperate and dangerous situation. The film might be in the Spanish language but its message is universal.

What do you think is its key message?

That we all have the power to help.

What do you hope audiences will take from the film and panel discussion?

The main goal of the screening is to raise funds for Proactive Open Arms but I also wanted to raise awareness of the situation off the Libyan coast.

I am really looking forward to hearing the activists who are going to take part in the panel discussion. Some of them have already been in Lesbos helping people that arrive there, and also working in Ireland fighting for refugee rights in this country. Hopefully we will get an overall picture of what these people are going through and inspire us to take action.

Astral will be shown at The New Theatre in Temple bar at 2:30pm, with a suggested donation of €10. All proceeds go to Proactiva Open Arms. For more information click here.