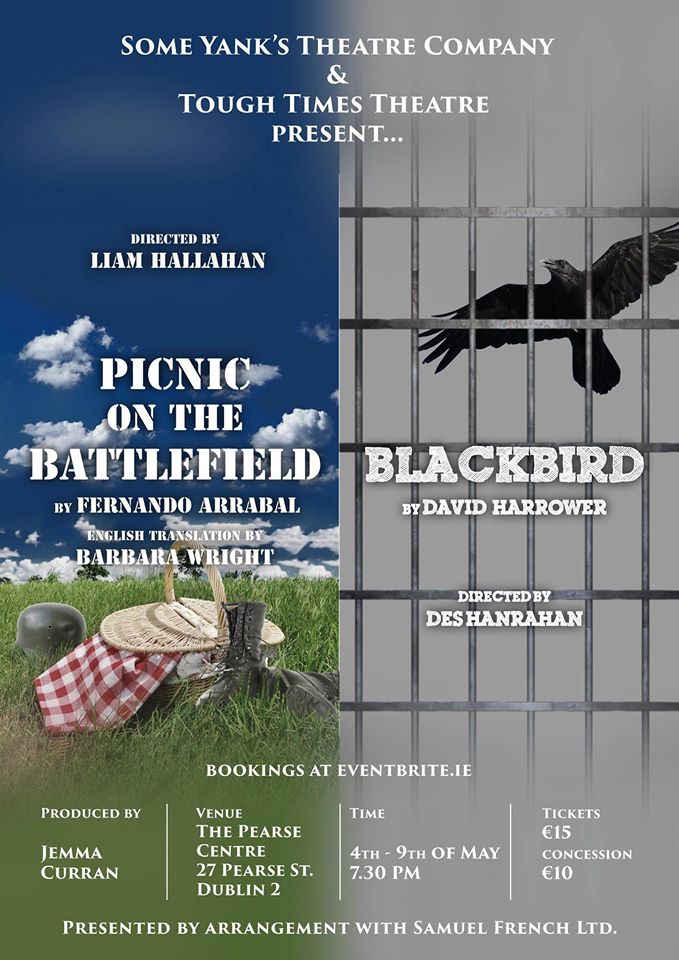 Picnic on the Battlefield – Review by Conor MacNamara

Liam Hallahan, founder and creative Director of Some Yanks Theatre Company, returns to the stage to follow up on his recent production Liam Hallahan buries his Dad Live on Stage with a one-two punch adaptation of Fernando Arrabal’s fringe classic play Picnic on the Battlefield.

In his usual style of passion meets quirkiness, Hallahan sets his newest piece in a sunken outdoor promenade with the audience clustered above on wooden walkways, looking down on the characters leap and dance below as if looking into a wartime trench. The result is a dynamic perspective that provides an additional level of nuance and energy to the actors’ performances, and reinforce the notion of this truly being a ‘picnic on a battlefield.’

Our protagonists Zapo and Zepo are conscript soldiers of opposing sides, kind-hearted buffoons baffled by the politics and etiquette of the war they find themselves in. So when Zepo is captured by his equally wide-eyed counterpart, it is only neighbourly to invite him to the picnic Zapo’s eccentrically insane parents have barged onto the battlefield to construct for the sake of visiting their son.

The absurdism of Arrabal’s writing mirrors Hallahan’s own comedic zeal, as the play interweaves the wackiness of childish slapstick comedy with sudden shifts into sardonic reminders that the war is never too far away. Zapo’s caricatured father (played by John Smyth) gives a standout performance, as he swaggers about daydreaming of his own career in a pre-modernised military. His constant chastising of his son with out-of-date tips on cavalry charges, saber rattling, and colourful raiments is one of the plays many wickedly funny moments of the over-the-top pseudo soap opera.

Hallahan himself grinningly remarks on the play’s style as a ‘fun absurdist farce with an ending that comes out of left field.’ He is quick to drop hints at the upcoming projects of Some Yanks, namely a large scale production of Stephen Adly Guirgis’ classic In Arabai, We’d All Be Kings. In his own words, Hallahan plans for this to be the studios ‘big breakout production’; an ambitious claim if not for the repertoire of zany talent that precedes it.