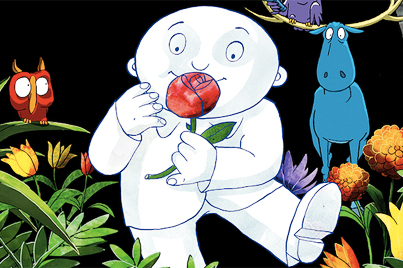 Moonman is an adaption of the classic children’s book by Tomi Ungerer. The book was adapted for the screen by Stephen Schesch and tells a story about the man who lives in the moon. Bored and alone in his cramped seat, one day the Moonman grabs the tail of a passing comet and hitches a lift to Earth. Upon his arrival he sets about exploring and has some curious encounters. He meets a mad scientist, helps build a rocket and is pursued by the army. However his absence on the moon doesn’t go unnoticed. Sleep evades the world’s children and they become bleary eyed insomniacs while Moonman is missing from his seat in the sky. Meanwhile the all-powerful President of the World is busy deciding where he can conquer next; he turns his attention to the moon. The President is depicted as a farcical character and he is ultimately outsmarted by the gentle Moonman. Urgerer’s book was first published in the 1960’s when the space race between the superpowers was at full throttle and the story pokes fun at aspirations to conquer the moon. The friendship the Moonman forms with the mad scientist is his salvation and thankfully the ending is a happy one.

The character of the Moonman is simply depicted with a black and white line drawing. It makes for a very effective contrast set against the technicolour world he explores when he reaches the earth. Much of the story takes place at nighttime and there is an enchanting use of light and shadow, moonlight and starlight. The pace of the animation is reminiscent of how one might read a picture book. Some scenes are very still or roll gently in sequence as if pausing and turning the pages of a storybook, well matched by the musical soundtrack. The style of animation is quite different to the highly produced and technically sophisticated productions we have become accustomed to in recent years.

This work is produced by Cartoon Saloon. The Irish production company are based in Kilkenny and they also gave us The Secret of Kells, nominated in 2010 for an Academy Award. This is an eclectic but very charming animation. It has a strong story and the beautiful artwork will appeal to adults as well as children. Just like the original book it has the makings of a classic.
The Moonman is released in selected cinemas (including the IFI) on December 27.