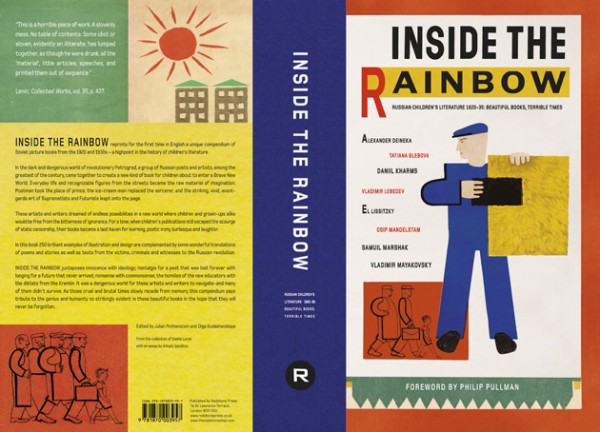 Raduga (Rainbow) was one of around a hundred publishers of children’s books in Russia in the 1920s, the best of which were offspring of the earlier Leninist seizure of power. That revolution, the mother of all rainbows, had been pregnant with the possibility of its existence long before October 1917, waiting to appear when the necessary elements came together. What followed was an explosion of utopian ideas and aspirations fertilizing all the arts, from sculpture to book design: you can see it in Eisenstein’s October and hear it in ‘The Internationale’ when in post-revolutionary Russia the future tense of its refrain was replaced by the present. The crowds sung it in Red Square when Lenin was buried there in January 1924 and the trumpeters wiped vodka on their instruments to stop their breath freezing them to their lips. In Badious’s singular phrase, there was ‘the passion for the real’ because everything seemed possible once the forms of the old world were overthrown. The forms of capitalism were cultural as well as economic and a new art that would break with this dimension of the past attracted a rich array of artists.

Inside the Rainbow, a stunning collection of pages from books published by Raduga, is a treasury of illustrations, though the pages of text to be found between its covers may suffer from blurring historical contours. There is a quotation from Bukharin’s The ABC of Communism (1920), ‘The salvation of the young mind and the freeing of it from the noxious reactionary beliefs of their parents is one of the highest aims of the proletarian revolution’, that serves as a subtext to the visual material that follows but other quotations are mixed together to set up a dichotomy between imaginative artists and a philistine political order; a dichotomy that developed over time, not one that there was always there. Raduga shut down in 1930 when a state monopoly of publishing was instituted and within a few years Stalinist diktats brought down the guillotine on avant-garde art with their insistence on ‘socialist realism’. It is a very different story in the early years of the revolution when Lenin’s government fully supported the avant-garde and Agit-Trains steamed off into the countryside to educate people with striking graphics and revolutionary notions. In 1920 the Institute of Artistic Culture (Inkhuk) and the Higher State Art-Technical Studio (Vkhutemas) were founded and it was from these bodies that the aesthetics of constructivism and suprematism emerged, blossoming into the pictures shown in Inside the Rainbow.

Suprematism, the term and the practice originated by the director of Inkhuk, 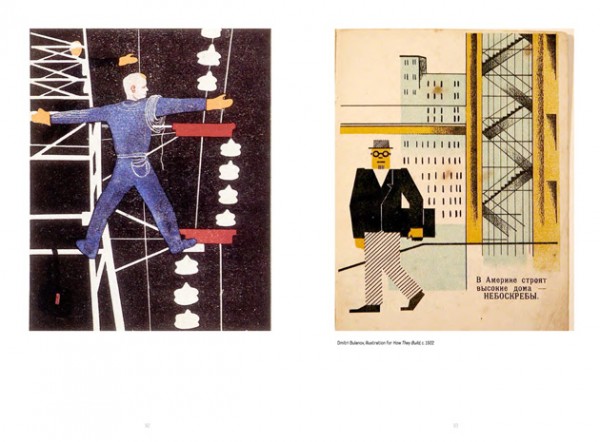 Kazimir Malevich, is most famously exemplified in his ‘Black Square’. Illustrations for children could not be as abstract as Malevich’s art – he described Suprematism as the victory of colour and form over realism — but there is the same striving for visual thought using lines and shapes, celebrating the dynamic through the stillness of geometric forms. Constructivism, a movement often associated with Vladimir Tatlin, seems an unlikely bedfellow for Malevich’s art. They were both inspired by the technologies of the early twentieth century but Tatlin looked to the material qualities of concrete objects, not their pure form, wanting industrial design to infiltrate traditional art and establish a new relationship with the viewer. For many of the artists working on children’s books this finds expression in their fascination with the machinery of the modern: electricity, tractors, forms of transport. Constructivism marries with suprematism in a Bolshevik depiction of the human form as de-individualized but at the same time warm and endearing; machine-like but socialist in its collectivist endeavours. This aesthetic comes across strongly as you turn the pages of Inside the Rainbow: a rejection of sentiment and spirituality in favour of celebrating what people can achieve when they work together as equals. It is there visually and in the stories and poems that populated some of the children’s books, like one of Arkady Gaidar’s: ‘Tale Of The Military Secret: In Which A Little Boy Keeps A Big Secret And Saves The Communist Motherhood’.

A postscript to the baleful trajectory from the utopian avant-garde to the incarceration of artists in Stalin’s gulags is the fact that Arkady Gaidar’s grandson, the economist Yegor Gaidar, was one of the chief architects responsible for dismembering and selling off to oligarchs much of the USSR’s material wealth.