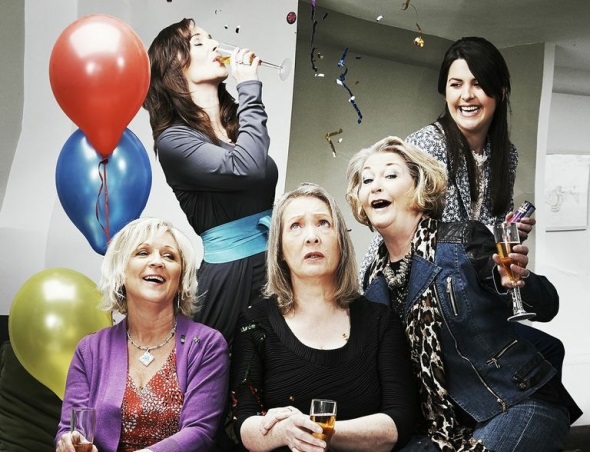 With all her problems, Breda is in no mood to celebrate her birthday but has little choice when her sister and friends show up on her doorstep with copious amounts of booze. Alcohol, the great enabler, works its magic and over the course of the evening the characters share their stories on love, work and relationships in that familiar coven of messiness, the Girls Night In. If all this sounds a bit Sex in the City, it’s not. Elaine Murphy’s Shush may be about the redemptive power of friendship, but the dark subject matter – depression, isolation, unemployment and death – roots it firmly in contemporary Ireland.

Not everyone will love this play, but the majority of the older female audience were howling, snorting even, with laughter for its duration. Fresh from the play’s opening run at the Abbey, the cast took a while to get used to their new surroundings – with timing a little off and delivery more of the pantomime variety at the beginning – but once they warmed up the laughs flowed steadily over the course of the two acts.

Deirdre Donnelly gives a moving and convincing turn as lonely Breda, the birthday message from her mobile phone provider a sad substitute for her son’s voice. Marie (Barbara Brennan) and Claire (Eva Bartley) nail the antagonistic love of the mother-daughter relationship, with a nice reversal as clean-living Claire tries to avoid her mother’s attempts to get her plastered. Ruth Hegarty’s naivety as gentle Irene provides much of the play’s comedy – such as her confusion of chlamydia and cholesterol, or the enigmatic Mr Banks and Mr Pin numbers jotted down in her address book as a memory aide – but she ultimately, like all great Fools, shows herself to be the most knowledgeable of characters by the time the curtain falls.

All five characters have secrets, their personal problems bubbling away under the surface creating tension. Some, like Claire’s story, are well sign-posted from the beginning. Others are revealed in genuinely surprising twists, with Ursula’s indoor sunglasses and bouquet of flowers from her husband not quite as clichéd a plotline as it seems. From her ‘sunroof’ caesarean to the perfectly-timed hiccup at the end of Act 1, Niamh Daly is believable and likeable as troubled yummy-mummy Ursula. It is she who brings the kernel of the play to life, arriving into Breda’s living room with her horrible homemade birthday cake. Acting as a metaphor for the lives of the characters, perhaps as a symbol for the shiny shell of boom-time Ireland, the cake ends up scraped into the bin under Jim Culleton’s direction – sugarless window dressing that looked lovely but ‘tasted shite’.

Shush is Murphy’s follow-up to her award-winning debut Little Gem and the balance between the macabre and the comic is well-executed yet again. Depressed Breda hides her mound of pills when the doorbell rings, but she also hides a half-eaten box of Ferrero Rocher behind the cushions on the couch so her sister won’t give out about her diet. And it’s a wise move because older sister Marie loves to give out. Nothing is beyond her reproach or ‘sage’ advice, which at times can grate, though Brennan’s performance also delivered some of the biggest gags of the evening. There were laughs all round for her overenthusiastic waltz with Breda, and the sisters were clapped off stage on their jaunt to harass a philandering ex-husband. Murphy also gives Marie some of the best one-liners in the play, such as her description of Breda’s emigrant son: “Colm’s the type, Ursula, if he fell into the River Liffey he’d come up with a salmon in his mouth.”

The clever set design by Anthony Lamble mirrors the fact that Breda’s life is falling apart. From the stopped clock on the kitchen wall to a motivational Dare to Soar print hanging askew in the living room, everything about Breda’s surroundings is a reminder to her guests, and to the audience, that this is a woman on the verge. Outdated and dilapidated, her house is crammed to the hilt with useless possessions that Breda ‘just wants to have.’

The play zones in on this notion of possessing, the characters’ happiness at first defined by what they own or have achieved – Irene with her three husbands, head of marketing Claire’s four-bedroomed house, Ursula’s massive car, Marie’s new job. But Shush quickly deflates our perceptions, deftly highlighting that there is no clear distinction between haves and have-nots in modern recessionary Ireland, just a grey area in between where people put on a face to fool their neighbours.

Shush is at the Civic Theatre until July 27th. Review by Sarah Gilmartin.