Pinocchio: The Greatest Wonder of the Age – Lyric Theatre – Review 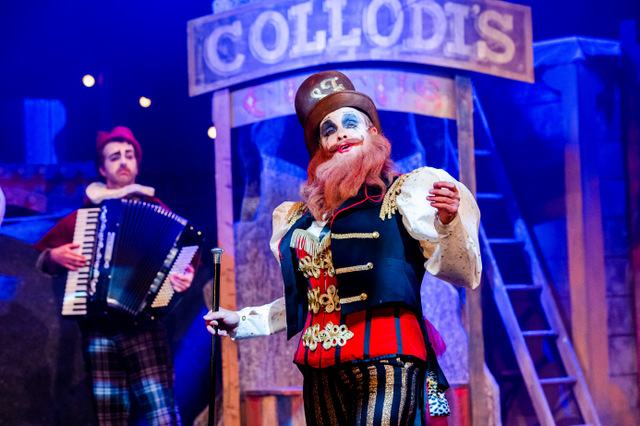 Pinocchio: The Greatest Wonder of the Age – Lyric Theatre – Review
by Cathy Brown

The greatest wonder of our recent age might be the fact that we are finally able to return to live theatre and this Lyric Theatre Belfast Production of Pinocchio: The Greatest Wonder of the Age is an enchanting celebration of the transformative power of theatre.

Pinocchio is most famous as the 1940 animated film. However, this version of the story of a wooden boy who wants to be real owes as much to its Italian originator Carlo Lorenzini – known as Collodi – as it does to Walt Disney. Writer and director Paul Boyd cleverly melds memories of the movie and details from the original text to come up with his own distinctive piece of theatre.

At its heart, Pinocchio is a story that asks what it is to be a real person, and Boyd’s conceit is to dispense with the other settings in the story and present it entirely in a carnival, where, as evil circus-owner Swallowfire says ‘everything’s an illusion when the circus comes to town’.

When bearded lady Swallowfire discovers the mythical Tree of Truth, she sets her carnival next to it, hoping it will make her circus the greatest in the world. When a local carpenter, Old Joe (Paul Boyd) makes a puppet from a piece of the tree, the wooden boy, Pinocchio, comes to life. His heart’s desire is to become a real boy, with the help of the Blue Fairy (Eimear Fearon), but can he withstand the temptations of circus life? 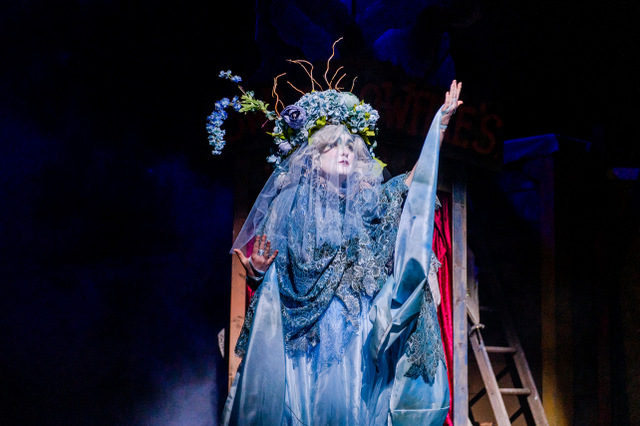 The core ensemble cast of seven play multiple roles and multiple instruments and are led by Michael Mahony who opens and closes proceedings as Mr Keys, and charms as Pinocchio’s friend Matchstick. Eimear Fearon is a winning presence as the put-upon Talking Cricket and her stunning singing voice is used to great effect in the Blue Fairy’s song Heart’s Desire. Christina Nelson and Paul Boyd (ably stepping in as temporary understudy for Richard Clements) are an amusing pair as Lady Cat and Mr Fox who try to tempt Pinocchio away from his heart’s desire while Allison Harding’s Swallowfire prowls about the stage like a demented Alan Sugar, growling out her catchphrase ‘my circus, my rules’ and oozing menace at every turn.

However, special mention must go to Christopher Finn, who brings Pinocchio to life both as a puppet and a boy. The way that he can both manipulate the puppet while turning in a thoughtfully moving performance is impressive, particularly during his solo number All Will Be Well.

Boyd takes the darker and more outlandish elements of the traditional Pinocchio tale and rounds off their sharp edges. His Pinocchio is less naughty impulsive imp and rather more confused boy, making the central character much more endearing. Pleasure Island doesn’t feature, but there are passing references to naughty children being turned into donkeys and the famous whale that devours the central characters is suggested through some rumbling sounds and one giant blinking eye.

Stuart Marshall’s carnival themed set is simple but inspiring while Mary Tumelty’s lighting adds a sprinkling of magic to the proceedings. Gillian Lennox and Erin Charteris embrace the vaudeville through their costuming and Deborah Maguire’s choreography is sharp and focused within the confines of the Lyric stage. Covid restrictions do mean that the production is more static than previous years leading to a few pacing issues, and some of the interactive sparkle is lost, but that is to be expected in the current times.

At the heart of the production are Boyd’s excellent songs, and from year to year he never disappoints. Supported by strong musical direction from Oli George Rew, highlights include the vaudeville-styled opener Days Gone By, and the empowering beat of ensemble song Hear Me Shout. It helps that all the cast are strong singers and Richard Russell Edwards operatic take as the Red Lobster literally hits the high notes during his showcase number Find That Note, despite a few unfortunate sound issues.

Pinocchio is one of the classic coming of age tales about childhood, pain and love, and the quest for authenticity. The narrative arc of learning to follow conscience over desire has a tendency to feel preachy, but here it is presented as a simple fervent story about a wooden puppet’s quest to be a real boy and to find the answer to the riddle of what it is that unites people and makes them human.

One of the ten year olds who came along with me declared the show ‘really brilliant and magical’. Pinocchio might be known to most of the audience as the Disney animation, but here it has been boldly reimagined with originality and charm. Pinocchio: The Greatest Wonder of the Age will undoubtedly captivate a young audience with its infectious energy, strong songs and top-notch performances. 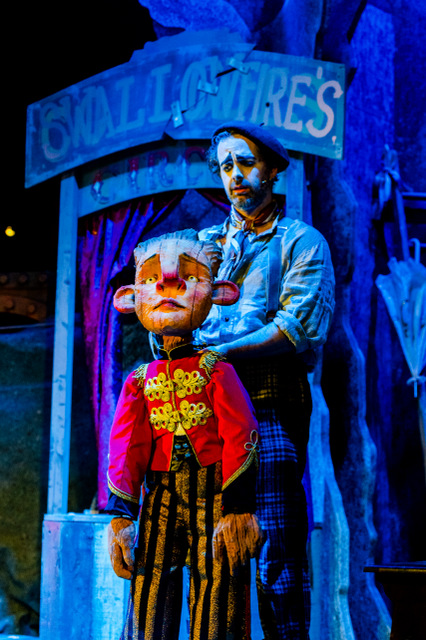