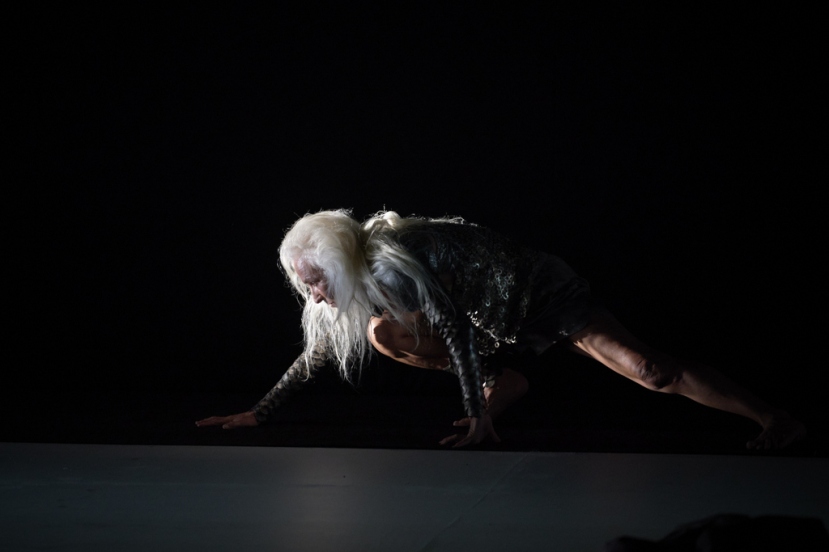 “What’s happiness?
They haven’t cut my tongue out yet
Or beheaded me
I won’t be flogged this morning
Hopefully”

And so begins the first section of the latest work by Marina Carr. The play is broken into 21 sections or poems. These pieces vary in length and subject matter. Some are based on Greek myths featuring characters such as Oedipus or Antigone. Other less familiar names like Demeter, Persephone or Jocasta send your brain scurrying through the vaults trying to pin down the details of their story. The Garden of Eden is mentioned in passing, ‘It wasn’t much’ is the dismissive description. Some elements of the work are quite personal in nature. There are musings on a graveyard in Connemara or the death of the writer’s parents. Another section gives us a short conversation with the Moon who speaks in a thick Kerry accent. All these disparate strands are contained in this wide-ranging new work. 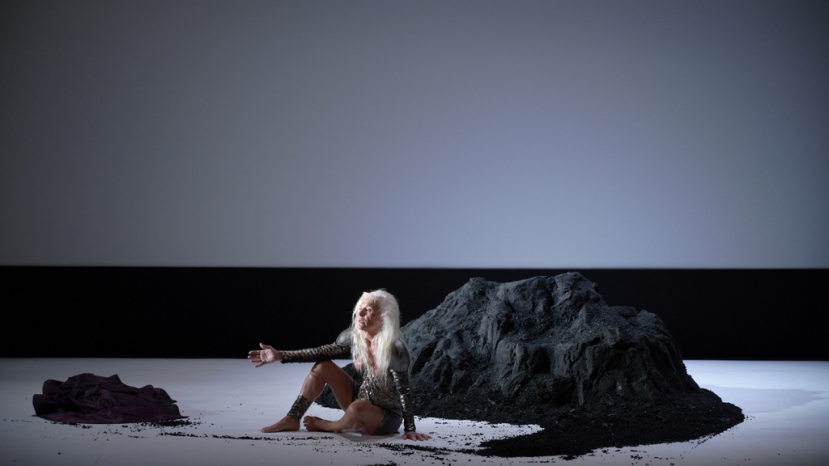 This is Caitríona McLaughlin’s first production as Artistic Director/ Co-Director of the Abbey Theatre, and she’s pulled out all the stops with an impressive cast and crew.  Olwen Fouéré has a long association with Carr, having performed in The Mai, By the Bog of Cats and Woman and Scarecrow in the past.

The production is visually striking, using strong contrasting colours. There are three parts to the stage with a desk at the front and back of the set, to show the writer at work. The middle section of the stage has a white floor with a rugged black rock bursting through it. The white floor is often stained black as the sediment is dragged and tracked by Fouéré’s movement. Olwen Fouéré appears like a queen, bare-chested and unrepentant as she tells the various tales. Screens drop from the ceiling to show enlarged images of her face or body, which adds to the intimacy. 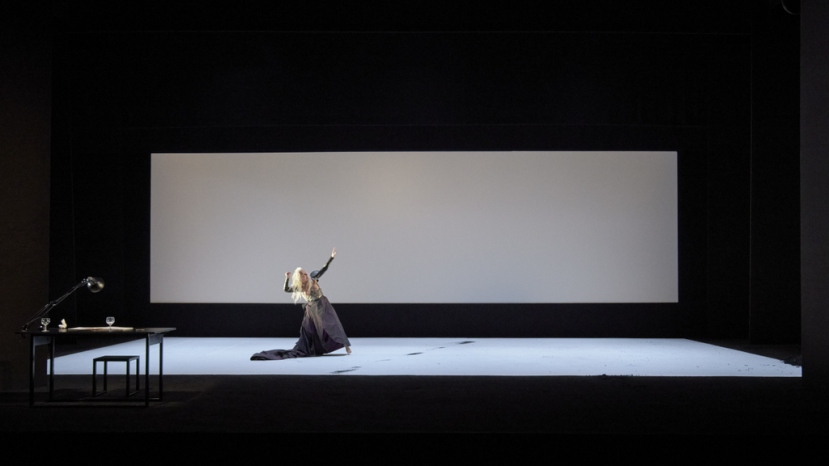 Your enjoyment of this piece would be helped by reading the play before you venture to the theatre. The text is essentially poetry and the density and complexity of the work make it difficult to understand the first time you hear it. You’ll lose the subtleties of the piece. I spent a lot of time in the theatre trying to build a narrative between the different segments, which simply isn’t there. Other than these are women presented through the ages, there is no clear connection. In the end, all the various strands are pulled together in the simplest and most elegant of fashions. The most impressive aspect of the production is surely the performance of Olwen Fouéré. It is rare a solo performance runs over an hour but this production is closer to 90 minutes. She never slips over the course of the evening, keeping the intensity at a truly beguiling level.