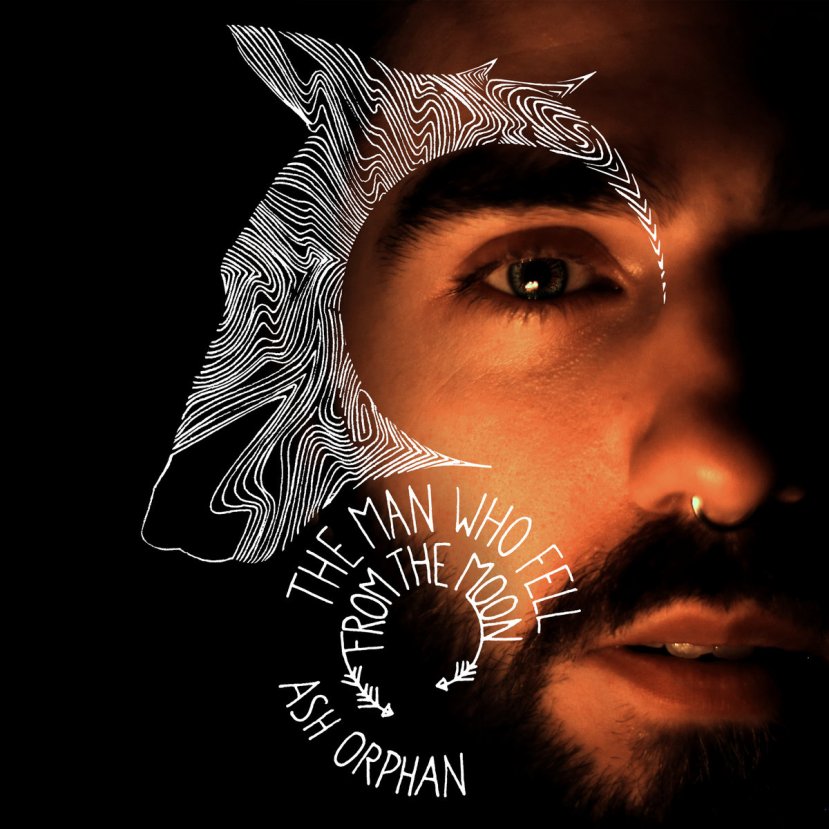 We had the chance to put some questions to Ash Orphan about his new album ‘The Man who fell from the Moon’ which was released earlier this year. You can find the results below…

You funded the album with a Kickstarter campaign. Do you think it’s a good method? Any positives or negatives from the experience?

I’ve had a couple of experiences of Kickstarter campaigns with two of the bands I was in. One successful and one that didn’t make it. So I knew a bit what to expect and nervous about the money I was asking for. Kickstarter is a great platform to raise money towards a project, and I’m grateful to the 117 people that backed the project because I couldn’t put more money in myself to have physical copies and hire a PR for the launch. At the end of the day, the album would have been released anyway as I recorded everything at home, paid for a professional sound engineer to mix everything properly (big shout out to Henry Blanc-Francard that brought to life the sound I was aiming for) and sent that over a mastering studio in Seattle (Resonant Mastering). The Kickstarter was to push everything further as a professional project. Definitely some positives and negatives from the experience. But what lasted is the fact that a hundred and seventeen human beings decided to support me with a bit more than €4,800. Just because they enjoyed what I was doing as a musician, as a solo act. It feels enormous for me and I hope I lived up to their hopes and expectations with the album. I’m happy and proud to have reached that amount, by myself too. It was a real challenge for me to reach €4,500, being the only one to promote, to contact my friends, family, etc. I was scared it was too much. And until the last few days, I didn’t know if it would work. So yes, here’s the positive. I had people backing me up on a thing I was doing in my room. Just because they believe in me. I’m so grateful for that. And I’ll never say it enough. Positive because it was the last piece of the puzzle on my personal accomplishment of releasing a piece of art just by myself after being in bands. I proved to myself that I could finish a song, that I could sing and write lyrics.

The negative part is more on the budget I set. But there was no way to know beforehand. Because the budget was already high, I made the smallest budget possible. I wanted the kickstarter to be successful even with the possibility to add up some money at the end. And that’s what happened. Nothing major but an extra €500 would have been ideal to cope with the reward making cost and the shipping process. Now that this is behind, I probably would have made a better investment than the PR team I got (but I’ll detail that on your next question). The last negative was also being just by myself. It was pretty stressful and taking during this month of the campaign. That was the support of band members is so nice and priceless.

Have you found it hard to get the attention of the press? Did you use a PR team or was it all by yourself?

Yes. Yes and yes. And more yes. I didn’t know anyone in the press industry and I was showcasing English-speaking progressive fingerstyle music in Paris, France. In strict business terms, I was far from the buzz project. For people not knowing much about music in France, there are a lot of bands and artists in what business call the “independent” scene, meaning not sticking to “radio-friendly” music. In France, radios have to play at least 40% of French-speaking music. It closes some doors when you don’t fit in that category. Doesn’t mean it is impossible, but you don’t give yourself the best start.

And that’s where my lack of knowledge on the communication part makes me say I shouldn’t have hired the PR I did. They were probably really good, but it didn’t work for my music. Again, probably because my music was not fitting the press the agency reached out in France. That’s my personal reading from my experience. From all the things I have to do to “manage” my own self as a musician and to promote my music, PR is for me the hardest. Still now. And I know I’d need someone do deal with it instead of me. So any recommendations are welcome (laughs).

What do you miss most since the Lockdown?

Playing for and in front of people. I miss that invisible connection that happens when all of a sudden, a room becomes silent, when people close their eyes and let themselves go. When we are all going on a journey for a moment feeling like an eternity. I miss the warmth and the smiles. I miss the hugs and the exchange that are created in that moment. I miss the mistakes and the reactions. I miss the claps and the stares. I miss the magic that exists only at that moment. The uniqueness. The always-so-different. The unexpected. The love.

And the smell of the ocean.