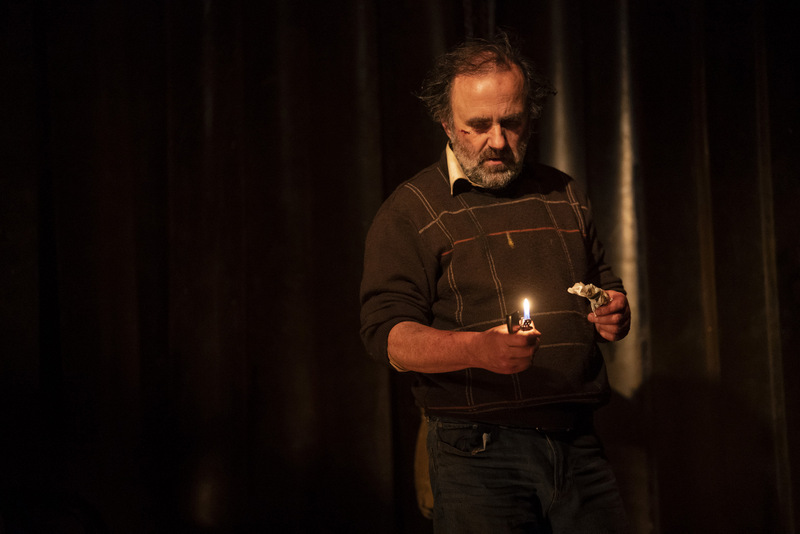 As the audience take their seats, Francis Donnelly (Lorcan Cranitch) is already on stage. He’s lying asleep on a pile of sacks containing some type of grain. He’s dressed in a ratty brown jumper and a pair of dirty jeans, along with a pair of wellies. The stage is filled with boxes, buckets and other odds and ends. Plastic sheeting blocks the back of the stage from sight. It is a representation of a barn, where our protagonist lies in wait. As the play starts in earnest, we are plunged into complete darkness. We hear the sounds of a scuffle taking place as someone has arrived to attack Donnelly. He meets them with force and wins the fight. When the lights come back on, the legs of the other individual are visible at one side of the stage, sticking out from under a pile of sacks. The fight is over and Donnelly has won, his opposition lying dead or dying.

After this vicious start, Donnelly moves around the stage with adrenaline still coursing through his veins. It takes minutes for him to calm down as he shouts and paces the floor. In time, he starts to return to normal and tells the audience a story that took place many years before. It’s the tale of Big Jim Donnelly, one of his ancestors, who moved to Biddulph, Ontario in 1845. There he stakes a claim for a piece of land that is already owned by another. He’s a man that solves his problems with violence and this situation is no different.

This is a new play by Rory Gleeson, who is known as a novelist and screenwriter. This is his first work for the stage and is based on fact. The story of Jim Donnelly is quite well known in Canada and has sparked a number of books, films and plays. This production draws on the same saga for its inspiration. Gleeson is a permanent resident of Canada and the Irish connection inspired him to write this work.

While the play is on a small stage, it has an impressive production company behind it. Landmark are responsible for some of the best productions on Irish stages in recent years, including work such as Asking For It, Ballyturk and Grief is the Thing with Feathers. This is one of their smallest productions in this 66 seat theatre.

The play lasts just over an hour but much of the early segment is spent without words, with Donnelly in solitude as he paces the floor or moves sacks around the stage. Donnelly is a brutish and violent man who has just committed a terrible deed. We see the aftermath of his actions but also the physical impact it has on him, with scabs and scars on his face and arms. The story of his ancestor in some ways reflects his own tale and gives the audience an idea of who Francis is as a man. The tale is quite difficult to follow, as it’s told by the confused mind of Francis as he recovers from the scenes of violence. It asks much of the audience and you need to pay attention to grasp the complexities of the plot. The main point of interest is the performance of Cranitch who embodies this confused creature. We feel his anguish and terror, while also his visceral fear. He captures Francis’ state of panic perfectly and the intimacy of the space draws the audience into his world. 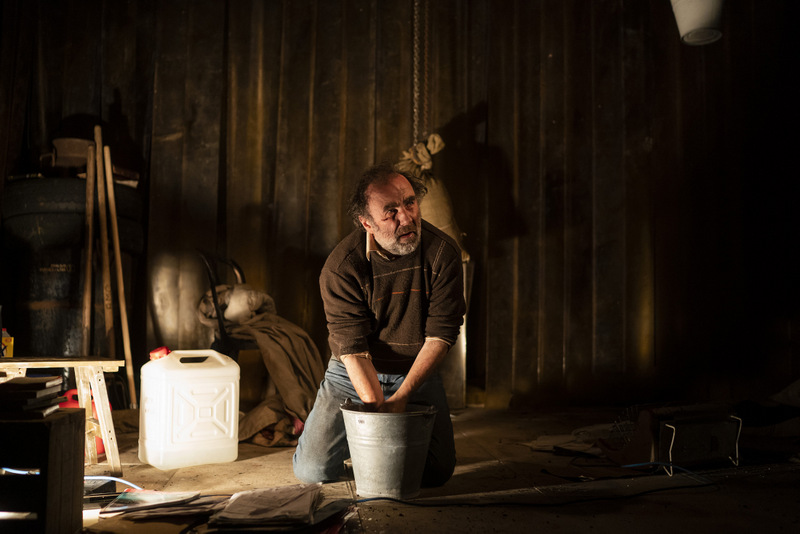