It’s the very near future and the end of the world has come, our beautiful planet Earth destroyed by fire, flood and every other dreadful climate-changing event. The answer is to leave in a vast space-ship. The size of a small town and fitted with all the accoutrements of a luxury cruise liner, it has been designed to shuttle survivors to a new life on Mars.

This is the first film adaptation of the Swedish writer Harry Martinsson’s 1956 poem, Aniara., an extraordinarily seminal work already translated for opera and theatrical productions. It opens as MR (Emelle Jonsson) a reserved young woman in ship’s uniform, arrives for the maiden voyage. She watches the arrival of passengers in holiday mood, all clearly looking forward to the three-week journey to another world. How they have been selected for the flight is never explained. About a thousand in number, they look like a cross-section of strangers on any Swedish high street, polite, well dressed individuals of every age from babies to pensioners, the only signs of the traumas they have experienced shown in sudden glimpses of scarred skin or damaged limbs.

Their minds have been damaged too and as a specialist IT technician, it is MR’s job to help them deal with their unhappiness. She operates a robotic room, a gently-voiced space in which people can exchange depression and nightmare for pure and positive memories of the life they have lost. Ever-efficient, MR keeps her own traumas to herself.  All we ever know is that she has no family or friends left alive and that she longs to get to know an equally reserved woman who is a pilot on the ship. 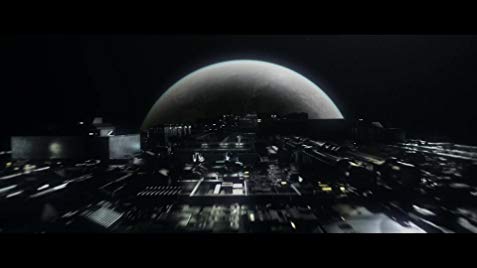 So far, so dystopian. Which means things can only get worse. When the ship loses power, the captain – a control freak clearly fighting his own demons – reassures his passengers that all will be well. The crew know this is a lie; the ship is dead, unable to get them to Mars, or anywhere else. Plans are laid for the preservation of food and water, and as months roll into years and truth and rumour swirl about the ship, the demand for downtime in the robotic room increases until MR and a new team of helpers are forced to keep the facility working around the clock.

When it crashes ,we encounter the single comic event in this very serious film. Overloaded with human tragedy, the robot has a major nervous breakdown, the gentle female voice screaming in horror and disgust before every brightly lit shred of spiritual thought is strangled into darkness.

Still our stalwart heroine does not buckle. Content at last in a relationship with the pilot she has lusted after since the beginning of the voyage, she keeps herself going by devising new ways to calm her passengers. Indeed, considering the hopelessness of the situation and the comparative numbers of passengers to crew, everyone remains extraordinarily well behaved. Perhaps it’s a Swedish thing, but even as suicide rates escalate and strange cults grow ever more weird, there are few signs of confrontation or vandalism. Instead, as the vessel gradually deteriorates from pleasure ship into sarcophagus, the two woman and, eventually, a baby (don’t ask!) turn in on themselves, determined to maintain their own secret world in the midst of despair.

And perhaps that was the point of Harry Martinsson’s original poem – posing that old existential question about how to go on living in the face of death. For MR, it seems, the answer is love among the ruins. Yet because this film never allows us to know her properly or care, her fate, like that entire ship of fools, left me feeling as cold and distant as space itself.