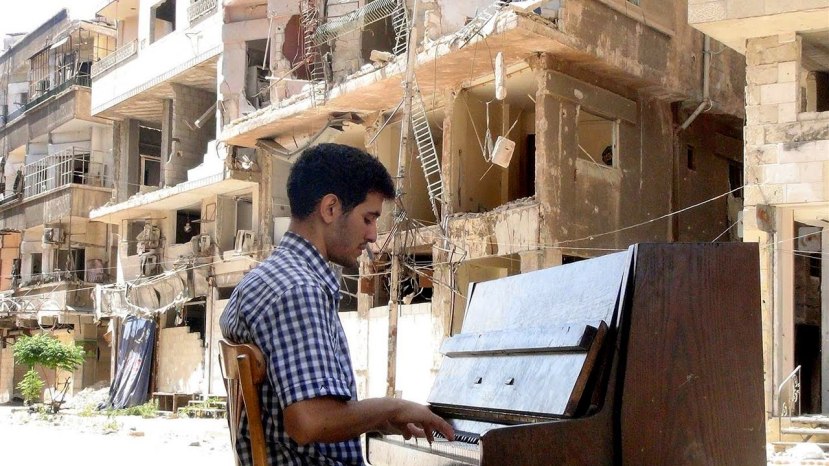 The last seven years have seen almost daily reports of the awful hardships undergone by the people of Syria and the slow destruction of their homeland. Our response was one of horror at first but constant exposure has left many of us blasé and it is only when the situation is personalised that we realise the day to day struggle so many people have to face, simply to survive in the madness that Syria has become.

Born to a refugee Palestinian family, Aeham Ahmad became an unwilling celebrity when a photo of him wearing a green t-shirt and playing a battered piano amid the ruins of his home town, Yarmouk, was published in a German magazine in 2013. In The Pianist of Yarmouk, Ahmad tells us what led to that point and of his desperate efforts to escape from Syria and create a life for himself and his family in Western Europe.

Growing up in Yarmouk, a disadvantaged suburb of Damascus, Aehamd showed an early talent for music and was encouraged to learn to play the piano by his father, a musical instrument maker who was blind from childhood. He tells us of the financial struggles of his family to pay for his lessons and the prejudice he faced from some of his teachers because of his ethnicity and social status. However, his determination to learn and his obvious talent saw him through and he graduated from the Conservatoire of Music in Damascus in 2011 soon after his marriage to Tahani.

A few days after the birth of their first son,  tanks rolled into Yarmouk and the civil war became a reality for Aeham and his family. The army sealed off the whole district, his brother was arrested and Yarmouk became a ghetto where people struggled to survive. Food became more and more scarce and when Isis took control, all forms of entertainment were banned. Aehem’s piano was destroyed and he, too,  became a hunted person. His book tells of the dangers he faced in trying to get his family to safety and gives us an insight into the difficulties so many others have undergone to escape from the chaos in Syria.

The Pianist of Yarmouk is an engaging and compelling memoir and captures the sad reality of the lives of so many of the refugees we have seen on our screen over the last eight years. The reader for Audible, Nezar Alderazi, tells the story well and is able to convey the terror and despair that Aeham experienced as well as the optimism and courage that saw him through. To compliment this memoir of Aeham’s life you can listen to his music here.

The audiobook is available from audible.co.uk and lasts 10h30 mins