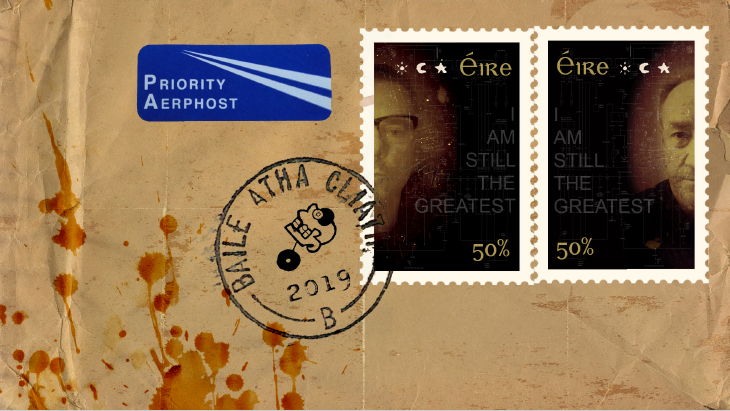 ‘All Art is quite useless according to Oscar Wilde’ – Dave Couse

A House are one of the greatest Irish bands that never made it! They join a multitude of other bands that didn’t quite made the step into the big time. They did, however, receive much critical acclaim, release some iconic songs (and videos) and make a lot of friends along the way. The band have recently become the second recipient of the NCH/IMRO Trailblazer Award, following on form Microdisney last year. On the 29th of June, two members of the band (Dave Couse and Fergal Bunbury) along with some friends set out to recreate and celebrate A House’s career and in particular one album, ‘I Am the Greatest’.

A House formed in 1985 when former members of the band Last Chance, vocalist Dave Couse, guitarist Fergal Bunbury, bassist Martin Healy (who had all been school friends at Templeogue College), and drummer Dermot Wylie came together as A House. Over the course of their 12 year career, various members joined the band and they released 5 albums. Their song ‘Endless Art’ from ‘I Am the Greatest’ (1991) was for one week the most played song on British radio, however, due to distribution problems along with its surprise success, the song barely reached the UK Top 50. The band broke up in 1997, with their last gig being in the Olympia on the 28th of February.

The album ‘I Am The Greatest’ harks back to another era in Irish music, and indeed there were few in the Concert Hall under forty years old last night. It did, however, have the feeling of a celebration, and many in the audience seemed to know each other.

The night was introduced by Gary Sheehan, the Head of Programme Planning at the National Concert Hall. He talked briefly about the success of the band and how surprised Dave Couse was to receive his call. While it proved impossible to reunite the full band, we did get two of the main participants in Couse and Bunbury. There were three other musicians on stage, making up an arrangement of guitar, bass, keyboard and drums.

The band played the songs in the same order as they appear on the album, but they did reinterpret a number of the tracks. Endless Art got the biggest make over, with new lyrics featuring many of the stars that have died since its original release, including Kurt Cobain, Amy Winehouse and Leonard Cohen, with a special tribute to David Bowie at the end. The lyrics also included a brief mention of A house themselves (rhyming with Mickey Mouse).  ‘I Am Afraid’ featured guest vocals and drums by the daughters of Couse and Bunbury respectively, which received the biggest applause of the night.

Dave Couse did talk briefly between the tracks, mentioning the visuals on the screens were created by the multi-talented Bunbury, and also to introduce the rest of the band (and his daughter!) but there was little dwelling on the past or what could have been. Instead, they seemed to enjoy every minute of this event.

Their encore featured one song from each of their other albums, including their second most famous song ‘Call Me Blue’.  While ‘I Am The Greatest’ is over twenty years old, the music still sounded as fresh and vital as it did when it was first released. Whether the night tempts them to have further gigs or even a new release remains to be seen, but if the band are indeed dead, they are not forgotten.