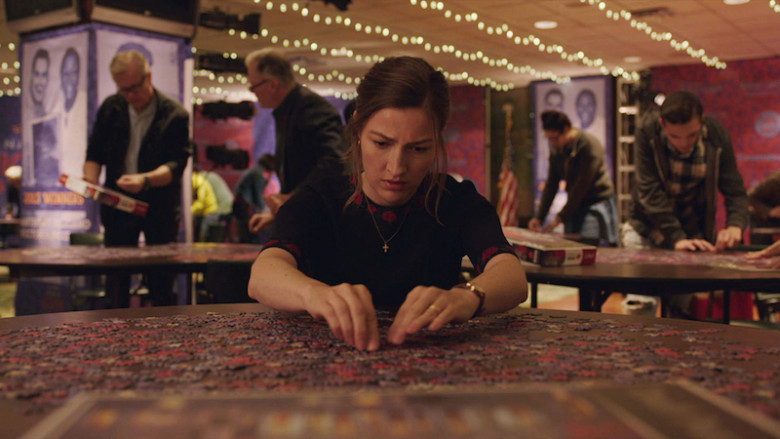 Marc Turtletaub, the producer of Little Miss Sunshine (2006), makes his directorial debut with Puzzle. Agnes (Kelly MacDonald), buried in suburbia, has a husband Louie (David Denman) and two teenage sons. He runs his own garage business and apart from fishing has no interests other than ensuring there are no surprises in the daily rhythm of his life. A man in his forties firmly set in his ways. Agnes, as the film begins, appears to be content with this uneventful life. The first major scene in the film shows Agnes doing all the preparations for a party including inserting candles in a cake she has made. When she carries the cake from the kitchen into the party, one is taken aback when she blows out the candles herself. Louie has not lifted a finger, nor have the sons. But one of the guests has brought a present which will lead to her predictable life being upended.

That present is a thousand piece jigsaw puzzle; while another one is an iphone. She is very suspicious of the iPhone but with the encouragement of her teenage sons she comes to terms with it and in her new adventures finds it more than useful.  She initially puts the jigsaw puzzle on a shelf and forgets about it; she continues with her routine which includes being an active member of her elderly Roman Catholic community. However, in her melancholy, one day she takes the jigsaw puzzle down from its shelf, spreads the pieces out and to her delight finds she can finish it very quickly. She has a yearning to find more jigsaw puzzles. She takes a train to New York to a specialist jigsaw shop where she buys two more large puzzles. While in the shop she notices a small ad which states “Champion desperately seeking puzzle partner” with a request to text. She makes contact and shows up at the brownstone owned by Robbie (Irrfan Khan) a man entirely different in every aspect to anything she has ever encountered. He and his home exude an easy affluence. She enquires what he does and he says an inventor; he further states that with one invention he had a lucky break. Robbie is the antithesis of the American fable of pulling yourself up by your own bootstrap in order to make a fortune. He did it by luck and he is a jigsaw puzzle enthusiast. The world of jigsaw puzzle solving takes over Agnes’s life. Inevitably things begin to change with her performance at home deteriorating and Louie, slow as he is, starting to notice.

Turtletaub with the lightest of touches shows Agnes’s slow distancing from Louie for example by her failure to buy his favourite cheese which is done by Agnes looking at the cheese in the supermarket sitting on its shelf, then considering it and and deliberately not putting it in the basket. A subtle but powerful act of rebellion. Turtletaub has many such small details which are scrupulously observed. They are more powerful than words. MacDonald is centre stage as she moves from being a suburban mouse of a housewife to a woman who is complex and intelligent who fascinates the sophisticated Robbie. Khan is perfectly cast as Robbie. He never misses a beat.

Puzzle is a carefully observed film taking a jigsaw puzzle as the unlikely medium to create a change of pace in Agnes’s life. Turteltaub’s gentle but precise images keep returning to the mind long after you have left the cinema. It creates a desire to see those images again to try to understand how the magic was achieved. A gentle, thoughtful movie which is worth seeing more than once.