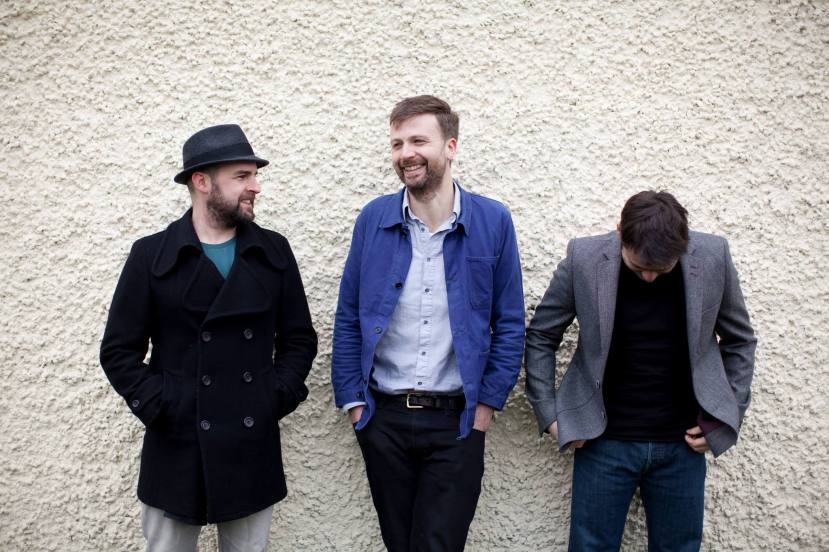 First off, the logistics. The gigs are held on the cricket pitch. You enter through the Lincoln Place (rear entrance) of Trinity. Less than half of the cricket pitch is used, with the crease remaining intact. The ground was covered so hopefully the pitch didn’t suffer too much damage for the cricket purists amongst us! There wasn’t a lot to complain about other than the usual debacle of the portaloos, but they come with all outdoor venues. The gig didn’t feel that packed, whether this was the intention or that the tickets didn’t sell in the numbers desired. Possibly too much competition from Coldplay? It was lovely to leave a gig and be that close to the centre of city. Hopefully it will become a regular Summer venue.

The first band on the night was Frightened Rabbit, and it was a treat to get them as a support. Lead singer Scott Hutchison was in typical feisty humour, telling those eating at the back that he was happy to ‘soundtrack their dinner’. He also took issue with the fans shouting up song names, telling them that they have a set list for the gig! I guess he does have a point. The band played a mix of songs, going through their career with Modern Leper and Head Rolls Off being two of the highlights, the opening line ‘Jesus is just a Spanish boy’s name’ getting a laugh from the assembled masses. Judging on those around me, they made a few new friends on the night.

Bell X1 arrived on stage on the dot of 9pm and went straight into a set that once more spanned their career. They now have nine albums dating back to Neither Am I in 2000, which makes them veterans of the stage. Opening track Fake Memory came from their most recent release; Arms in 2016. The arrangement was relatively simple, with Paul Noonan centre stage and the focus on guitars, bass and drums, with the odd keyboard heavy track.

The more upbeat songs seemed to suit the summer mood, and songs like Velcro, The Great Defector and Flame being among the highlights. ‘Rocky Took a Lover’ was wedged in half way through the set which was something of a surprise. After wall to wall radio play and recently winning Ireland’s Greatest Song Lyric, I had suspected it would saved for last. Maybe the band are getting bored with their own creation?

Noonan said that he could see seven cranes from the stage and declared that the good times are back! Unfortunately it is mostly Trinity College itself doing the building, with these gigs possibly helping pay for the regeneration.

The night finished with a three song encore. The first being a lack lustre version of Careful What You Wish For before an impressive rendition of Bad Skin Day which slowly morphed into Boys of Summer by Don Henley. The final track of the night was the fitting The End Is Nigh, which had a small taste of All My Friends by LCD Soundsystem interspersed. They’re a band that have had more than enough hits over the years to make for an enjoyable night in this outdoor setting!

Fake Memory
Bring Me a Fire King
Velcro
The Ribs of a Broken Umbrella
Out of Love
My First Born for a Song
The Upswing
Eve, the Apple of My Eye
I Go Where You Go
Rocky Took a Lover
Sons and Daughters
The Great Defector
Flame

Encore:
Careful What You Wish For
Bad Skin Day / Boys of Summer
The End Is Nigh / (All My Friends)