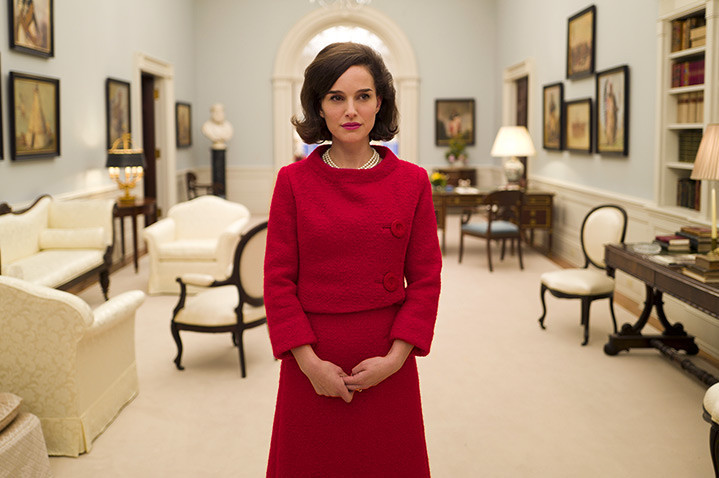 The presidency of the United States of America of John Fitzgerald Kennedy lasted a mere 1,036 days, cut short by an assassin’s bullet on 22nd November 1963. He and his wife Jackie were in an open top car, he standing, waving to the crowds. He is then slumped on the floor of the car. She is crouched over him in a pink Chanel suit with a matching pill box hat. She remains in that suit, even though blood splattered, for several hours after the shooting. Within a half an hour of the shooting, Lyndon B. Johnson is sworn in as president. The entire world is shaken to its core. The Kennedy presidency was over and its dream of Camelot.

Larrain takes the events of that 22nd November and the ensuing days leading to the funeral as the focus for this look at Jackie Kennedy. On 29th November she gave a private interview to Theodore H. White at Hyannis Port, the Kennedy sprawling bolthole in Cape Cod. The full handwritten text of that interview is held in the John F. Kennedy Library and Museum. It contains corrections made by Jackie. Larrain uses this interview to give some insight into Jackie.

Natalie Portman embraces the challenge of playing Jackie with a cool confidence which fits with the public persona of Jackie. Adjectives do not easily encompass Jackie but sophisticated and knowing are two that are of some assistance. Her awareness of the historic importance of her husband’s presidency was something which she was aware of as she returned to the White House for the last time and how her husband’s assassination would be remembered with that of four earlier President’s most notably Abraham Lincoln. Her two very young children play prominent roles as her benign Irish priest (John Hurt) all add to the mixture of chaos, trauma, protocol and grief. At all times Jackie is central and her unique balance pervades the entire.

Portman’s performance has to place her in the front line for an Oscar. In addition John Hurt’s role as the old priest, while small, is a masterly one. For those who remember 22nd November 1963, they will also remember precisely where they were when they first heard the news. This is for them a must-see film. For those, the majority who were not old enough to remember where they were or were not even born, Larrain’s Jackie will give some idea of the aspirations and hopes that came to a violent and bloody end in Dallas, Texas. Camelot was not allowed to be.