The Plough And The Stars – Abbey Theatre – Review

The Plough And The Stars – Abbey Theatre – Review by Frank L.
Runs until Saturday, 23 April 2016

The Abbey first presented The Plough and the Stars on 8th February 1926 and have created over fifty new productions in the intervening ninety years, the latest being 2012. As the play is set in Dublin in the winter of 1915 and in the spring of 1916, the events of Easter 1916 are the story. O’Casey, with the passage of ten years, attempted to draw together some of the many varying strands which contributed to the momentous events which began on that Easter Monday. He describes those events as they blew apart the lives of a group of individuals, in all their variety, who were residents of a Georgian tenement building in the heart of the north inner city where the destruction which ensued would be some of the heaviest.

Sean Holmes, in this centenary year of Easter 1916, brings the atmosphere of Dublin 2016 into the proceedings. There is a room in a flat in which a large leather sofa bed dominates. There is a stairwell constructed of steel scaffolding tubes which exudes the atmosphere of a late twentieth century grimy corporation block of flats. The young characters, except the Volunteers, are dressed as if they had emerged from the streets around the Abbey Theatre today. The British tommies too are dressed in contemporary fatigues. However the clothing of Fluther harks back to that of an Edwardian labourer and Uncle Peter is bedecked in his finery from an earlier period of nationalism. 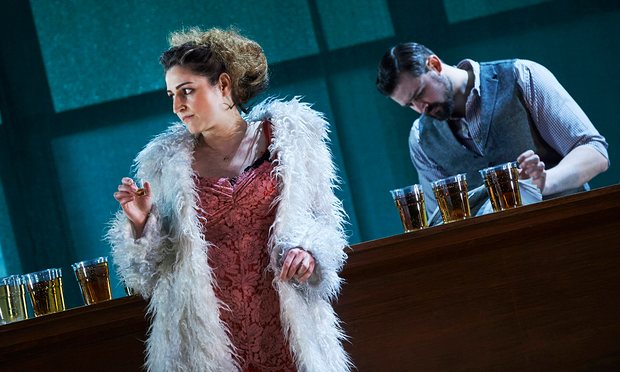 Unnervingly Mollser, sporting a Manchester United top, begins the proceedings having emerged from the audience by singing Amhrán na bhFiann, haltingly into a microphone at the front of the stage. However just before the end her voice is overwhelmed by the consumptive cough which is devouring her. Holmes introduces various brief interludes of contemporary pop music into the play and even a pantomime like sequence when Fluther engages with the audience. A further innovation is the use of a television remote control in the pub to turn on and off the patriotic speech as it quells intermittently the chatter and the bickering of the main protagonists as they come and go for a drink. The use of plastic glasses which were liberally thrown to the ground made for a noisy terrain subsequently, which while perhaps reminiscent of current late night Temple Bar excesses, irritated as they lay on the stage making a scrunching sound when trod upon.

The final Act begins with the sound of the fighting raging and slowly, oh so slowly, the stairwell lowers to the ground and its previous vertical wall become the floor of a top room “furnished” with a few beer crates and underneath the underlying structure creates a collection of cramped spaces in which to find shelter. Mollser’s coffin lies at the front of the stage bedecked with the Manchester United top. It was a knowing touch which brought to mind the irony of Dublin’s youthful protesters five years ago, in streets close by, wearing such regalia in order to denounce the visit of Queen Elizabeth II.

Sean Holmes drives his actors to exude a great deal of energy as they live through the brief joys and the enduring deprivations of the period. O’Casey’s play was a fine artistic attempt to try to unravel some of the complexities which contributed to Easter 1916. Holmes and the Abbey have created a revival which may well infuriate some for the innovations introduced but when considered as a whole it keeps this iconic play at the centre of the difficulties of interpreting the events surrounding Easter 1916 and its aftermath. Those difficulties faced O’Casey in 1926 and continue to face Ireland in 2016. The Plough and the Stars remains central to these discussion as this production proclaims.