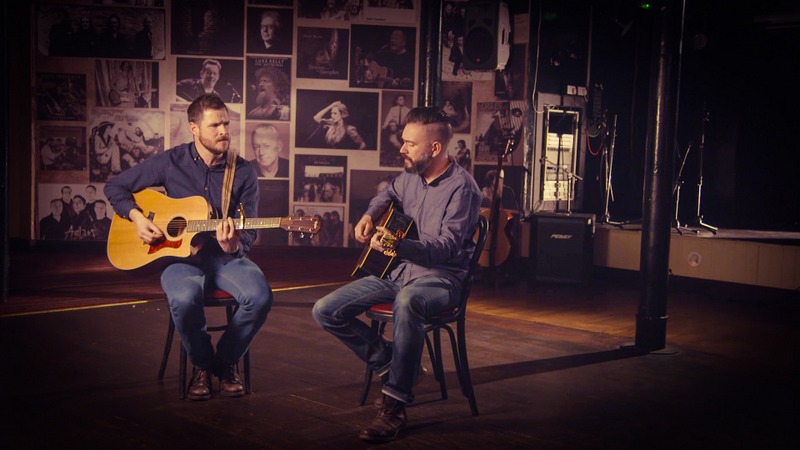 We had the John Colbert from the Black Bank Folk band about their Album Rising Out (Released Feb 26th), a Concept album based around the 1916 Rising featuring special guests Damien Dempsey, Paddy Casey, Gavin Glass, Grace O’Malley and Jem Mitchell.

When did you first hear the story of your Grand Uncle Con Colbert?

I first heard of the story of Con Colbert when I was very young. My dad brought us to Kilmainham Jail when I was around 10 and we were brought into the cell where Con was held the night before hi execution. I remember that at the time the tours didn’t go into all the cells so they had gone out of the way to show us Con’s cell and that was something that stayed with me, the stone floor with no bed. It probably wasn’t until I did history for the leaving cert and I did my special topic on Con Colbert that I really got to know the whole story.

It must have had a big impact on your childhood?

I certainly made you feel like you were connected to something very special. At the time (80’s) there were the troubles in the North so to be proud of the 1916 leaders and the nationalism that they represented was, in some places, seen as something no to shout about. But my family always had a great sense of pride in Con Colbert and the sacrifice he made for his country.

How did the idea for this album come about?

I was in Toronto in an small Irish bar. On the entire back wall of the bar was a painting of all the executed leaders of 1916 and I was talking to an old Irish man and I was pointing out Con on the painting and telling him of my connection when he said “You should be doing something for the centenary, with your family history and being a musician there’ll be a big interest in that”. That was around 7 years ago so when I got back I said to James Sheeran (the other half of Black Bank Folk) that we should do something original. James has a big love and knowledge of Irish music and we decided to try and write an concept album about the 1916 Rising, but we were conscious to try to steer away from the stories that had been covered before, and try to find some of the lesser know ones to write about.

Did you do a lot of research on the period to write this album?

We did. James got stuck into the Bureaux Of Military History witness statements and I went through everything I could find and between the two of us we amassed a fair amount of knowledge and set about turning that into songs. Some of the eye witness accounts were invaluable as you could place yourself in their shoes and really get a sense of what it was like back then. There was always a huge interest from the both of us in the period so we’re still researching even though the album is done. We’re trying to find stories to tell during the gig to enhance the listeners experience and give the songs a bit more background.

There’s a great list of guest stars on the album, were they all friends or how did you get in contact with them?

I knew them all except Gavin Glass. I play bass with Damien, Paddy, Grace and Jem so it wasn’t too hard to convince them to get involved. Damien has been a fan and supporter of the project since we started and we’d been sending him demos over the years. We had asked him if he’d like to be involved and sent him over some music. He had recently found out that his great aunt Jennie Shanahan fought in City Hall during Easter week so was keen to pay tribute to her and all the other women that had been involved. Gavin produced the album so we were only delighted that he contributed so much to it. Grace O’Malley co-wrote the song Lullaby with us and duets on that with James .Paddy and Jem help us out with Plough To The Stars and Jem joins me on Dear Molly.

For the gig in Liberty Hall, there is a mention of ‘special guest’. Who can we expect to see, or is that a secret?

The special guests on the Liberty Hall gig are a very well guarded secret, but I can say that along with other special guests, we will be joined on the night by Dublin poet Stephen James Smith who is going to be reciting some of the poems written by some of the 1916 leaders throughout the performance. The band itself, some of the finest musicians this country has to offer, (almost entirely stolen from Damien Dempsey) Eamonn De Barra, John McLoughlin, Sean McKeown, Dermot O’Hanlon and my brother Mark Colbert, so the audience will be in for a real musical treat.

Do you think those who died in 1916 would be happy with Ireland today?

I think in some ways yes and in others no. Obviously we’re not perfect, but there’s so much about Ireland now and what we have achieved since 1916 that they would be proud of. When the Rising was coming to an end, Pearse stood beside Volunteer Desmond Ryan looking at the flames in the GPO and outside and questioned whether it was all worth it.
‘When we are all wiped out, people will blame us for everything. But for this, the war would have ended and nothing would have been done. After a few years, they will see the meaning of what we tried to do. Dublin’s name will be glorious forever, Men will speak of her as one of the splendid cities, as they speak now of Paris! Dublin!’