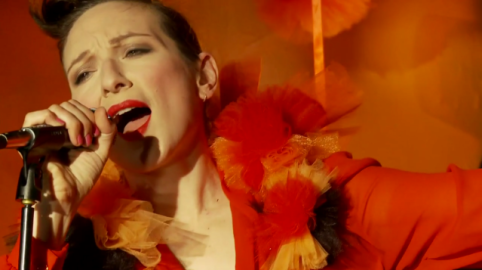 We have two tickets to give away to one lucky winner for My Brightest Diamond at the Workman’s Club on Friday October 31st. To be in with a chance of winning, just email your name and day time telephone number to nomoreworkhorse@gmail.com and tell us the name of My Brightest Diamond’s 2006 album (the answer is below!). Make sure you put My Brightest Diamond in the subject line of the email. Closing date for entries is Wednesday Oct 29th at 1pm. Tickets are non-transferable and you must be over 18 to enter.

Not many people can front a rock band, sing Górecki’s Third Symphony, lead a marching band processional down the streets of the Sundance film festival, and perform in a baroque opera of their own composing – all in a month’s time. But Shara Worden can.

Her multi-faceted career as My Brightest Diamond, which began with an acclaimed independent rock record, has reflected her journey into the world of performing arts.  This Is My Hand, her fourth album, marks a confident return to rock music, one informed by her mastery of composition and a new exploration into the electronic.

Born in diamond-rich Arkansas and then raised all around the country, Worden came from a musical family of traveling evangelists.  She went on to study operatic voice and then classical composition after a move to New York City.

Shara began issuing recordings as My Brightest Diamond in 2006, following a protean period in the band AwRY, and joining Sufjan Stevens’ Illinoisemakers live ensemble. Asthmatic Kitty Records released her debut album, Bring Me The Workhorse in 2006, A Thousand Sharks’ Teeth in 2008, and 2011’s All Things Will Unwind, which featured songs written for the chamber ensemble yMusic.

“Diamonds,” Shara sings, “so wild I cannot tame them / so shiny I cannot name them.”