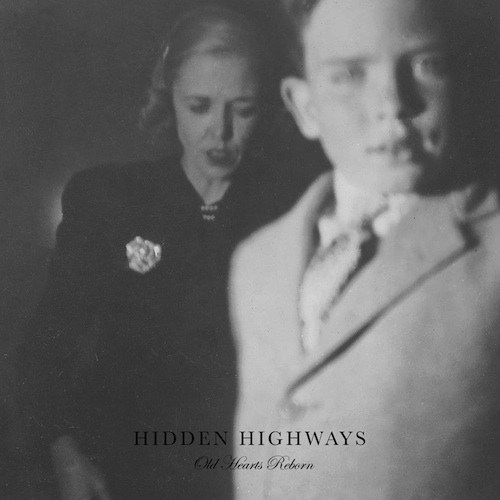 Ever since I discovered Out On A Limb Records, I have always associated Limerick’s independent label with a long line of fantastically loud and alternative guitar based bands. From Waiting Room and Rest, to Giveamanakick and Ten Past Seven, the label has for the last decade, consistently released one exceptional record after another. You can now quite positively, add Hidden Highways into the fold, following the release of their delightful debut full length album, Old Hearts Reborn.

Americana, country and folk, aren’t genres that would instantly jump off the record shelves at me, or initially make my ears prick up with excitement. However what Hidden Highways – a duo made up of Carol Anne McGowan and Tim V. Smyth – have produced, has certainly thrown the cat amongst the pigeons in that regard. The two songwriters first began collaborating back in 2010, and the combination of their deep love of country tinged folk, acoustic guitar and mouthwatering harmonies, culminated in the release of their eponymous 4-track EP, in the first half of last year.

Heartfelt lyrics, contrasting vocals and stripped back folk laden guitar sounds, are all pervasive within this delicately poignant sounding debut. One can imagine these two having grown up in America’s mid west, and inhaling everything that part of the world had to throw at them. Opening number “Empire of Old” introduces you to their swooning and passionate world in a positive way, where Smyth’s vocals are oh so slightly, more evident, to that of McGowan’s more subdued contribution. “The Western Line” flips the role of lead vocalist, and how McGowan grabs it with both hands. It’s a song that wouldn’t seem out of place being played over any chain gang scene from a western, with the songs vivid imagery, allowing your thoughts to be transported along, where you could be trekking across the countryside, with just the sound of an old steam engine for company.

Up next is “The World Began with a Waltz” – which I feel contains the slightest hint of Thom Yorke-like vocals – where Smyth has only a guitar and sparse sounding strings for company, during its opening 70 seconds. You can’t help but want to grab the nearest person and float around a dance floor with them. The elegance of the record continues with “Do I Want”, where the velvet tones of Smyth’s voice is seeking an answer, one which he doesn’t seem to know will come any time soon. “Won’t Be Goin’ Home” is not what you’d call an inspiring number, as it seems as though McGowan is resigned to the fact, that she won’t be attempting to rekindle an unrequited love, as she sings: ‘I know in my soul his weary kind/and I know I’ll be a stranger to his eye/but no matter how, hard I tried/well I’ve never been more guarded livin’ a lie’.

A cover of Towns Van Zandt’s “Velvet Voices”, could not have been a more aptly titled track for Hidden Highway’s haunting abilities, to have included on this personal collection of pensive storytelling. Having never heard the original I dare not compare, however the way you can be instinctively drawn in, based purely on their harmonies, says a lot in my book. The title track of the record follows, and proves that Smyth and McGowan’s prowess in concocting somber lyrics, which in turn lead you down the path of downtrodden imagery, is not a one off. Yet at the same time as all of this misery surrounds you, their correlated vocals allow the listener to be elevated to a happier place.

“Wild Woe” is an ode to the eternal feelings of love, longing and despair. Only the sound of a couple of solemn guitar chords and violin, accompany McGowan’s heart-rendering vocals, where the picture of desire and warmth is beautifully portrayed. “Time To Go Back To Sea” proves once again, just how accomplished the duo are as a song-writing force, with their ability to incorporate melancholic lyrics, bewitching harmonies and dark imagery so easily, during this subdued take on heartache and loss. The closing track “Next Time Round” adds some sparse and airy bass, to their already brooding and down tempo vocals. It’s a piece that seemingly allows them, to finally exercise some demons, by ultimately being prepared to look forward with hope. This is a country-folk fuelled record, that has the ability to paint a thousand pictures from beginning to end, and it’s one I won’t hesitate to return to over and over.