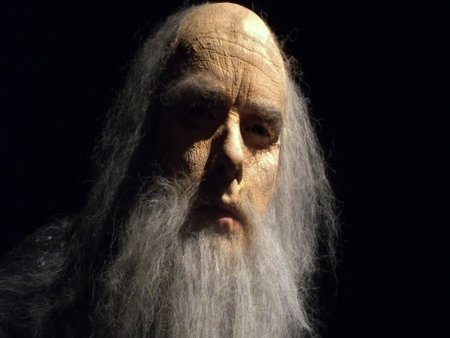 This is a stage adaptation of the Flann O’Brien’s 1946 novel ‘An Béal Bocht’, which is a loving parody of the Gaeltacht autobiographies such as Peig Sayers and An t-Oileánach (The Islandman). The focus of these novels was on how harsh and unrelenting life was in the Gaeltacht regions and easily sets them up for staire.

The play tells the story of Bónapárt Ó Cúnasa, a resident of Corkadoragha (a mythical Galetacht region) and brings him from birth to the point where the novel is written, some 30 years later. The play tells a number of anecdotes of life in the region, which are often wildly funny and far fetched. Several sections deal with various groups that come to view the inhabitants of the area for anthropological studies, recording their native tongue. Others attempt to eradicate the Irish language altogether from the area. These outsiders are met by the quick witted locals who are only interested in separating the visitors from their money (I’ll resist from mentioning the Gathering at this point)!

The stage is a raised platform in the shape of the island of Ireland, with a number of mountains and small houses added. This is used for a variety of purposes, from local marts, roads, villages to the house where Bonapart grew up.

I’ve seen Ruth Lehane (Bonaparte) perform well previously in physical comedy roles. In this she is employed in the lead role as well as narrator, moving the play from one scene to the next. The large blocks of text she has to deliver to carry the story forward felt heavy and at times you miss the comedy contained within. The play was at its best in the scenes where the stage is full, with all five cast members on stage, playing the parts of pigs, cows, Gaelgóirs, peasants, Englishmen, School masters and pupils. In these scenes the freedom of movement and rambling nature of the play became quite engrossing. This is the final part of Blue Raincoat’s trilogy of Flann O’Brien’s novels, having previously adapted At Swim Two Birds and the Third Policeman and does serve as a welcome reminder of the quality of his work.

Blue Raincoat’s production of ‘The Poor Mouth’ runs at the Project Arts Centre until the 24th. Tonight, as part of the Real Deal, all tickets are €16. There’s also a post show discussion on the 15th with Director Niall Henry and the cast.