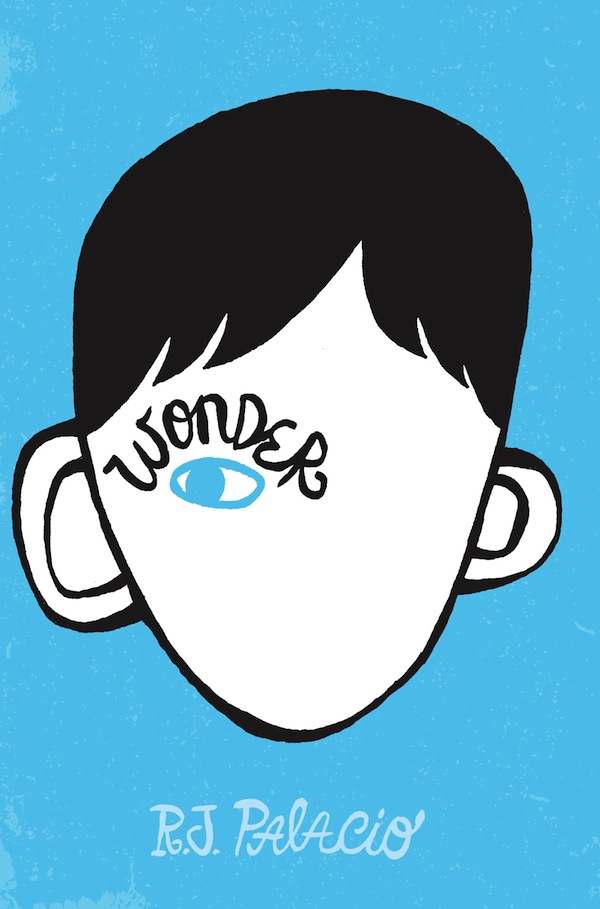 I read this interview a while ago with the author R.J. Palacio about her book, Wonder, and something about it sparked my interest. Off I went to the public library where a very nice lady ordered it for me. Wonder is one of those crossover young adult – adult books, like The Boy in the Striped Pyjamas or the His Dark Materials trilogy and I highly recommend it. It’s the story of August (Auggie), a ten-year-old child in New York who has a facial deformity.

Auggie never describes exactly what he looks like but every now and then a detail will be given about his ears or mouth. “I eat like a tortoise eats, if you’ve ever seen a tortoise eating. Like some prehistoric swamp thing.” At times, I found these quite shocking because I’d have forgotten about his face and what he’s supposed to look like. Having read the book, it’s interesting to try to picture Auggie. I have a very vague image of his actual physical appearance but I do have a real sense of knowing him. It’s a credit to Palacio’s writing that we get to go beneath the surface and to befriend Auggie, with all his complexity.

Up until the beginning of the book, Auggie has been taught at home and the book deals with his first year at middle school. Navigating school brings the challenges you’d expect – some kids are cruel, while a few restore your faith in humanity. The children’s gradual acceptance of Auggie and his “difference” is very well portrayed. Over time, they simply see Auggie – who is cool, smart and funny – and not his face. Kindness is a central theme throughout the book and is probably one of the reasons I liked it so much, as I’m a big kindness fan. “Kinder than is necessary. Because it’s not enough to be kind. One should be kinder than needed.”I know this might sound a bit saccharine but the harsh reality of Auggie’s world and the thoughtless cruelty he has to face on a daily basis steer it away from schmaltz-ville.

The chapters are told from different characters’ perspectives, including Auggie, his sister Via, his sister’s boyfriend, and Auggie’s friends. All of the voices felt authentic. Auggie is very lovable and has a witty and sharp edge to him but also a vulnerable and scared side. He’s a realistic mix of knowing exactly what people are thinking of him on the one hand, for example, he describes hearing people pause for maybe just two seconds when they first see him. Another time he says, “It’s like people you see sometimes, and you can’t imagine what it would be like to be that person, whether it’s somebody in a wheelchair or somebody who can’t talk. Only, I know that I’m that person to other people, maybe to every single person in that whole auditorium. To me, though, I’m just me. An ordinary kid.” On the other hand, at other times, he’s just a giddy and clueless ten-year-old kid.

Although Auggie’s chapters can be heartbreaking, brave and difficult, the chapters I found most touching were those written from his sister Via’s viewpoint. I wondered would siblings of people with disabilities relate to Via. She describes very honestly the difficulties she faces, at times, in having Auggie as a brother and the range of emotions she goes through because of this. What is striking, however, from all of the characters, is that being a teenager is tough for everyone, no matter what they look like, and that no-one has it all sorted.

August’s family live in some trendy-sounding part of New York and the one slight gripe I’d have with the book is that the parents are just a little too perfect and understanding. I expected them to lose patience (or the plot) at least once but they always seemed cooler than cool. Maybe such parents really do exist…..

Even if you wouldn’t usually go near children’s fiction, this is a gem of a read. I challenge you to read it without shedding a tear…or at least getting a lump in your throat. Auggie has to come up with a precept for school and his is “I think there should be a rule that everyone in the world should get a standing ovation at least once in their lives.” What a cool kid.