‘People will do anything for a pot of gold, anything’

We all know that St. Patrick himself (the Patron Saint of drunken violence) was a Welsh guy who was kidnapped and taken as a slave to Ireland. The people who kidnapped him kept a large selection of snakes, and after St. Patrick himself busted free and killed his captors, he set about to hunt all snakes in Ireland, as his holy grail, so to speak.

But why has the focus been moved away from St. Patrick himself and onto Leprechauns? Why are they seen as the emblem of Irish-ness and not the snake troubler? 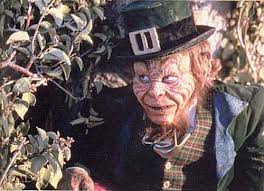 It’s hard not to be slightly depressed that one of the main images of Ireland is that of the leprechaun. The blame for this has been often put at the feet of ‘Darby O’Gill and the little people’, the 1959 movie starring Sean Connery as Michael McBride. The lucky charms cereal first appeared in shops in America in 1964, which featured a leprechaun as their mascot, and has multi coloured marshmallow bits as the charms. This is still a popular breakfast cereal today, and continues to poison the minds of young Americans into the belief that Leprechauns are widespread in Ireland. As with most of these things, the legends themselves are far more interesting. According to Joseph Campbell’s famous The Hero with a Thousand Faces, leprechauns are just that. Campbell calls leprechauns “reductions of the earlier pagan divinities” known as Tuatha De Danaan, a race of gods and part of the celtic mythological cycle of Medieval Ireland. 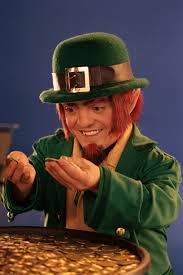 Sadly I think we’re stuck with Leprechauns, but I think we can take a positive out of it, that the pagan god is winning on the day which used to be about abstinence and holy obligation.