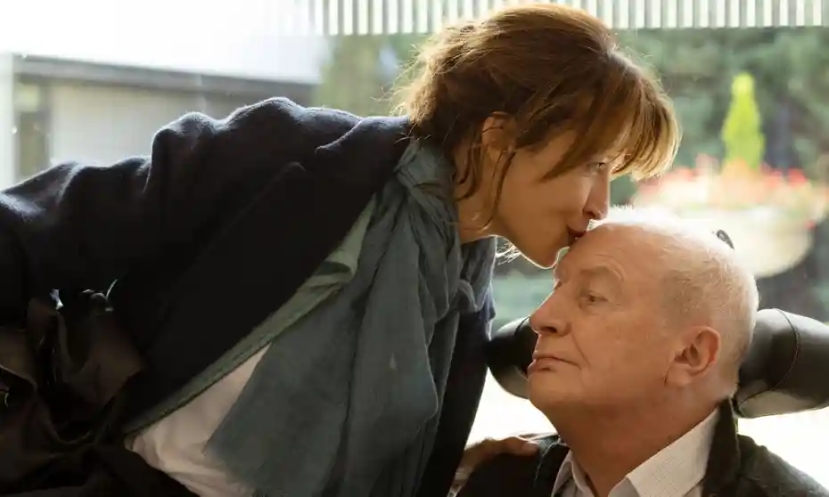 Based on a heartfelt memoir by Emmanuèle Bernheim, this masterful work by the accomplished François Ozon tackles one of the sensitive ethical issues of our age – assisted death.   With a stellar cast and polished performances, we watch the dynamics within a well-to-do Parisian family as they confront the challenges of a harrowing responsibility.

Following a debilitating stroke the overbearing father, André, requests an ‘end to it all’.  In spite of improvements to his condition, the benefits of physiotherapy, good care and the comforts afforded by affluence, he is determined to pursue his goal.  This in itself confronts the viewer and requires us to challenge our own perspectives and what our response might be.  The representation of the family response is masterful – and believable, horrified and disapproving of the request yet not wishing to cross their demanding patriarch.  The unity of siblings interlaced with little moments of jealousy and the father’s signals of favouritism are all carefully realised, and all too believable, together with flashbacks of selfish callousness.  In his repeated calling for death, there are times we ourselves want to put him out of his misery. He deserves a slap at least.

Overhanging all of this is the shadow of the holocaust as the Jewish legacy of the family becomes clear, albeit with subtlety.  Having escaped death through fortunate circumstances, the idea of now encouraging death and paying for it has a certain, if uncomfortable, irony.  Although the focus is very much on the family dynamic – we feel the mounting pressure and the way this spills over into their own lives.  But what is most remarkable is how the narrative, as with Bernheim’s memoir, challenges us.  What would we do in this situation?

The debate on assisted death often emphasises the horrendous suffering of those nearing death, their acute pain for example  In this instance André is improving all the time, he clearly can still have a quality of life. He has a lust for living on the one hand and longs for death on the other.  He has the best of care.  He has sophisticated friends visiting.  He likes fine wine and the delicacies of French cuisine when he gorges at a high-end restaurant.  He has an eye for the waiter and his handsome carers… and yet he wants to end it all.  This raises the ethical issue of whether he is right.   Is this just another example of his selfishness where he wants everything his way?  We enter into something of this dilemma through every glance and look shared between his daughters.  It is all handled masterfully and convincingly.  It is poignant without ever being sentimental.  It makes for compelling cinema at its best in the hands of a master director.