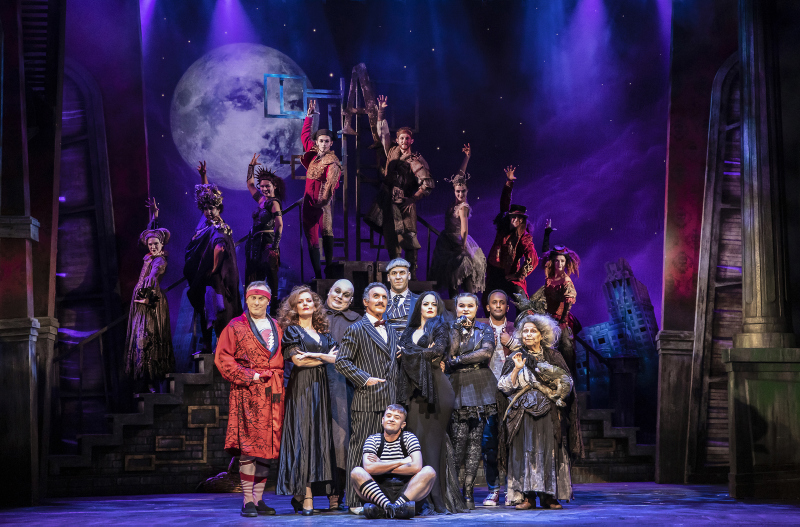 Find out more about this production here.

Wednesday Addams is all grown up! The little girl who would poison her brother just for a ride in an ambulance has now found love for the first time. As you would expect, the course of true love is never a simple one and the boy Wednesday has fallen for is just a bit too… conventional? His name is Lucas and they met in central park when Wednesday was out hunting birds with her crossbow. Their romance moved quickly and now it’s time for him to meet the family! Lucas and his parents are visiting the Addams family home for the first time. What could possibly go wrong?

Depending on what age you are, you’ll know the Addams family from one of their many incarnations. The Addams Family started life as a cartoon by Charles Addams, which ran in the New Yorker magazine in 1938. The strip has existed in a variety of forms from that time on, including the TV show (with the finger-clicking theme song) from 1964, which ran for two series and 64 episodes. There were also two very successful films, the Addams Family (1991) and Addams Family Values (1993), directed by Barry Sonnefeld. These films had an impressive cast, with Anjelica Huston as Morticia and Christopher Lloyd as Uncle Fester. It also launched the career of Christina Ricci as the creepy little girl Wednesday Addams. There are also a couple of computer-animated films in recent years.

This version of the Adams Family is a musical comedy, with the original production opening on Broadway in 2010. The play has lyrics by Andrew Lippa, and book by Marshall Brickman and Rick Elice. The cinephiles amongst you might recognize Marshall Brickman as the long time collaborator of Woody Allen, who co-wrote classics such as Sleeper and Manhattan. Rick Elice has a long history with theatre and wrote the book for the Broadway hit Jersey Boys.

This touring production has no major names from TV in the cast but they are all regulars on the stage. Joanne Clifton (from BBC’s Strictly Come Dancing) stars as Morticia and Cameron Blakely plays Gomez. Kingsley Morton plays Wednesday and she has a powerful voice that is suited to some of the more dramatic songs. One of the more enjoyable performances on the night was from Matt Slack as Uncle Fester. He plays the oddball Fester with a smirk on his face throughout, and you’re never quite sure what is going on inside his head, if anything! 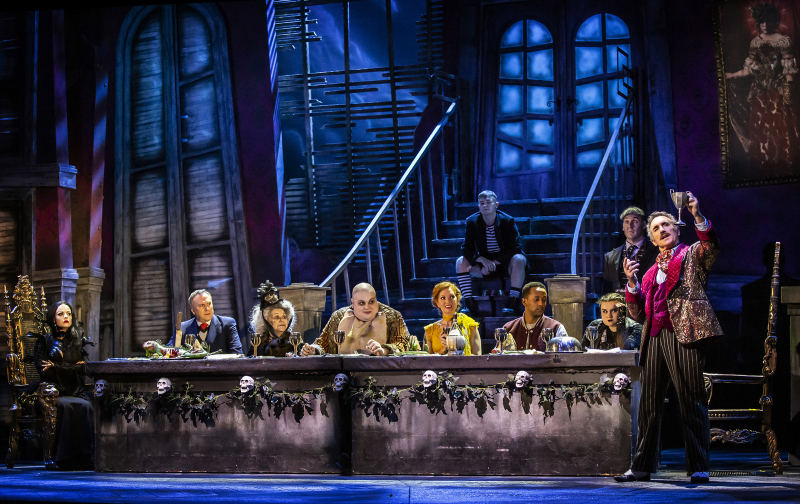 The production is aimed at those who are over 7 years old and it is not entirely suitable for younger kids. There were a number of very young children at the performance I attended and I suspect some explanations were required! The play is a musical comedy, and at times it could do with more of an emphasis on the comedic moments. The first act is very strong and uses many traditional haunted house tropes, with a conventional family having their eyes opened to a weird and wonderful new world. It is reminiscent of the Rocky Horror Picture Show and even at times The Muppet Show. After the interval, the balance is strongly skewed in favour of the musical elements with a succession of songs, while the comedy takes a back seat.  You’d have to question the inclusion of the love song between Uncle Fester and the moon, but it just about worked. The cast seems to have been chosen for the quality of their voices, with Kingsley Morton (Wednesday) and Kara Lane (Alice Beineke) particularly standing out. There is even a dance sequence where Joanne Clifton gets to show off her talents. Along with the main cast, there is an extensive ensemble that add to the various set pieces. If you’re looking for something dark, it is not here! This is a light-hearted, spooky production that aims to keep the gags and songs coming.