There are moments in the musical ‘Cabaret’ which are chilling. It presents something beautiful in the form of a young Aryan youth, blue-eyed, blonde with an innocent, pure voice. He sings a song that is lyrical and appealing – a Nazi anthem with an earworm you will not rid yourself of, ‘Tomorrow Belongs to Me’. We are seduced by pure evil as this Hitler Youth sings. It is a powerful manipulative moment in that iconic musical.

‘Abomination, A DUP Opera’ is shockingly similar. It is superbly scored by Conor Mitchell. It is beautifully sung with as fine an ensemble as you are likely to hear (with Matthew Cavan, Christopher Cull, John Porter, and Sarah Richmond, supported by Darren Franklin, Tara Greene, Helenna Howie and Ciara Mackey). They are all excellent. There is a serious investment of talent and cash in the slick, visual production. It is a wonderful, quality piece of theatre if it was not for the subject matter, but it is not what it seems.

There is a real quandary here. Outburst the renowned LGBT Arts Festival presents the Belfast ensemble in this NI Arts Council funded innovative piece, that requires detailed knowledge of the history of bigotry and hatred that has been fuelled and divided Northern Ireland for a century or more. In this piece all that abuse is hurled at the LGBT community for political gain and biblical legitimacy. The libretto uses verbatim the many  (credited) Democratic Unionist Party speeches and interviews and constructs them via a glorious and rich score for over 70 minutes. Most people stood up at the end and cheered. A number of the audience remained seated. They have heard hate speech before, dressed up, looking appealing, but hate is hate. 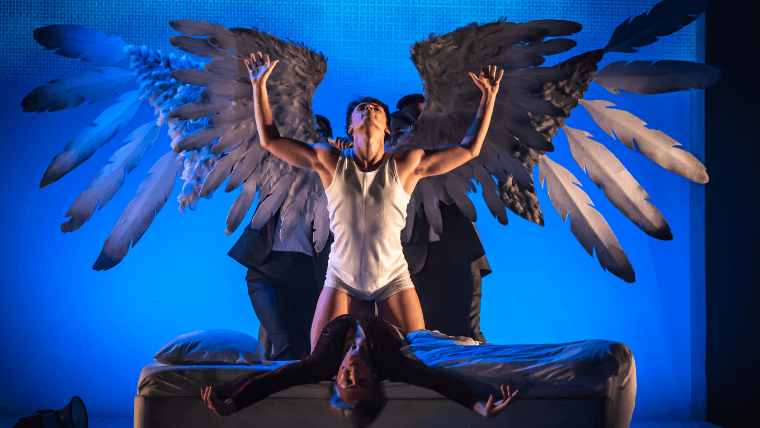 ‘Abomination – a DUP Opera’ is a magnificent musical rendition of hate speech. Hate speech that has destroyed lives, legitimised violence and oppressed LGBT+ people for centuries. There is no let up in this production. There is no redemption. At the end of the Opera, ultimately the DUP prevails as they still do. In that, there is truth.

Rebecca Caine adds her magnificent vocals to the bile of ‘Iris Robinson’. She is a powerhouse of musicality singing the most appalling opinions. Her only counterbalance is Tony Flynn’s wonderfully timed spoken role of journalist ‘Stephen Nolan’. He challenges ‘Robinson’ to explain herself in a strongly performed, non-singing role throughout.

Nothing is toned down. DUP hate speech gets a free reign for 70 minutes in this verbatim tale. There is no redemption. The musical ‘I Keano’, timed itself out as a generation forgot Saipan. The DUP is timeless. They never date, because they have not joined the rest of us in the 21st, never mind the 20th century and they are unedited in the messaging throughout this fresh and musically impressive operatic piece.

Nolan’s character doesn’t challenge ‘William Mc Crea’, the ‘Paisleys’ or ‘Sammy Wilson’, only ‘Iris’ and he never gets answers. The counterpoint is mute – it is not given any space. It is a DUP free-for-all – unchallenged. A 17-year-old boy Stephen Scott is brutally assaulted after ‘Robinson’ declares LGBT lives to be an ‘abomination, disgusting, nauseous etc. He is mute – we don’t see him or hear him. Only ‘Iris’ gets her say. We never hear of his horrific experience. The only ‘gay person’ on stage is presented as a ‘Side show Bob’ large wigged effeminate stereotype (well played) appealing to every negative stereotype that ‘justifies’ the DUP view.

At times, the lyrics were hard to hear and the production took time to settle after a dodgy start. The brilliant graphics by Conor McIvor left us in no doubt as to what was being said. Some of us know, Iris got her political ‘comeuppance’ which also erased her husband’s career, but it is vaguely implied in this production. As a married woman, wife of the First Minister, she was revealed as having an affair with a much younger man who also received State funds in her gift. We hear nothing of this. A scantily clad, beautiful young man appears in a balletic performance, but he too is mute. In fact, anyone who can counterbalance Robinson’s bile and hypocrisy is denied a voice. Like Scott, we hear nothing.

Close to the end, having endured an bour of gloriously sung ‘hate speech’, those of us who know our history, expect some form of counterpoint, exposing the leading character’s hypocrisy. None is allowed. Astonishingly, at this critical moment, we are shown footage of yet another IRA atrocity that injured schoolchildren, as an implied justification for the DUP hatred? The DUP didn’t find Catholic or Republican LGBT+ people disgusting and nauseous – they despised all LGBT+ people and their human rights. ‘I don’t care if they are rate payers’ declares Belfast Lord Mayor ‘Sammy Wilson’. What on earth was the purpose of the IRA footage at a time when the chronological story should have exposed the sordid side of this political DUP scandal?

To add further ‘justification’, despite all her hatred and misdeeds, ‘Robinson’ is then joined on stage by a full company rabble singing words like ‘Hate’ and she physically grapples with Nolan and crushes him to the ground. He is clearly defeated. This too is untrue.

We never hear that the real Robinson resigned her seat as a result of the ‘restaurant’ scandal. Her husband lost his First Ministry. She triumphs and prevails in this show. It was little comfort that I knew of the real outcome as it is completely missing from the Opera.

If this had been commissioned by (a fictional) Cullybacky Arts Group, it would (despite its musical excellence) never see the light of day. The fact that it was commissioned in association with the renowned LGBT Festival, does not excuse or hide the fact, that it is a beautifully scored and performed, unmitigated ‘hate fest’ as only DUP rhetoric can deliver. To those who endured the oppression of this politic, it is an unnecessary reminder, to those who didn’t…it was impressive and amusing.

There is no redemption for the human rights cause in this plot. ‘Nolan’ is crushed at the end and though ‘Robinson’ stumbles at the last minute – we are never told why. Throughout, no alternative voice is heard, the characters that could bring her down are unnamed and voiceless. Every potential voice (and there are thousands) that endured the consequences of DUP hatred is mute and invisible.

Every voice that added to the hatred gets uninterrupted, glorious operatic moments. There is no mitigation of ‘Africa is riddled with Aids’, the comparison of homosexuality with ‘child abuse’, the relentless insistence that same sex love is a ‘harmful deviance’. It’s an unchallenged free for all – and we know our LGBT+ family and other politicians did challenge this. They too are missing.

‘Iris’ justifies her ‘beliefs’ by quoting her selected ‘Scripture’. ‘Iris’ takes things literally. There is a great danger that a cohort will take this Opera literally too. People who loved this will say ‘ah sure we all know the story’. Many do not. Her character’s hypocrisy is scrubbed out. The voices of victims are never allowed to speak. The gay is presented as a negative stereotype.

Taken literally, this Opera will run and run in Trump’s America and Putin’s Russia. ‘Iris’ not only survives but her own ‘sins’ are washed away and well-scrubbed. In fact, the seventy minutes of unchallenged DUP hate speech (despite the quality artistic packaging – which only enhances the unchallenged message further) will certainly and sadly find an audience for many years to come.