Shortly after the Abbey’s production of iGril by Marina Carr, they have decided to revisit one of her earlier works. Portia Coughlan was first performed in the Abbey (Peacock) Theatre in 1996 with Derbhle Crotty starring. Derbhle also appears in this production but has moved up a generation and plays Portia’s mother Marianne Scully. This new production has Olivier Award winner, Denise Gough in the title role. Denise was born in Ennis, but left Ireland for London at 15 to pursue her career in acting. She has worked largely in theatre and has won two Olivier Awards, for People, Places and Things in 2016 and Angels in America in 2018.

The play starts on the morning of Portia’s thirtieth birthday. We find her in sombre mood. She has already started drinking, much to the chagrin of her husband Raphael Coughlan (Marty Rea). She asks him to join her in a glass of Brandy, which he refuses. Her birthday is a day she has come to dread as it is also the anniversary of the death of her twin brother Gabriel, who drowned on their 15th birthday in the Belmont river. Despite the many years passing, she is still deeply troubled by the loss of her brother. Now Portia has to find a reason to go on for another year, as she hears the river calling her to join her brother.

The play follows Portia on her birthday.  She is visited by family members offering gifts, disappears to the pub and meets a variety of people in her life. The only moments of calm she finds are those she spends wading through the shallows of the river, looking deep into the water.

This play was written two years before “By the Bog of Cats” and is part of the playwright’s Midlands trilogy. The work helped establish Carr as one of the most important Irish playwrights and it is easy to see why. There is a deep undercurrent of violence make it impossible to ignore.

The set by Chiara Stephenson is an unusual underground world. There is little attempt to recreate the average Irish family kitchen or pub, instead we get an ominous world of stone and clay. Above we can see a darkened sky, where haunting images of water are projected. A trench at the front of the set creates the river, where Portia finds a few moments of calm.

The cast seem to enjoy creating these fiendish characters, with the spiteful grandmother Blaize (Barbara Brennan) a particular highlight, along with the wild but good hearted Maggie May Doorley (Anna Healy). It is however, Denise Gough as the main character who carries the piece, with her brittle and fascinating portrayal of Portia.

This is a dark and distressing work that gives us an insight into the mind of Portia. Despite her harsh exterior, she is a troubled soul, fragile and severely damaged by her past. The work is populated by sinister and malevolent characters, who seems to ignore Portia’s problems and instead, focus on their own predicaments. Having such a selection of individuals on stage does not make for an easy night at the theatre, but it is quite fascinating to be immersed inside this devilish world. 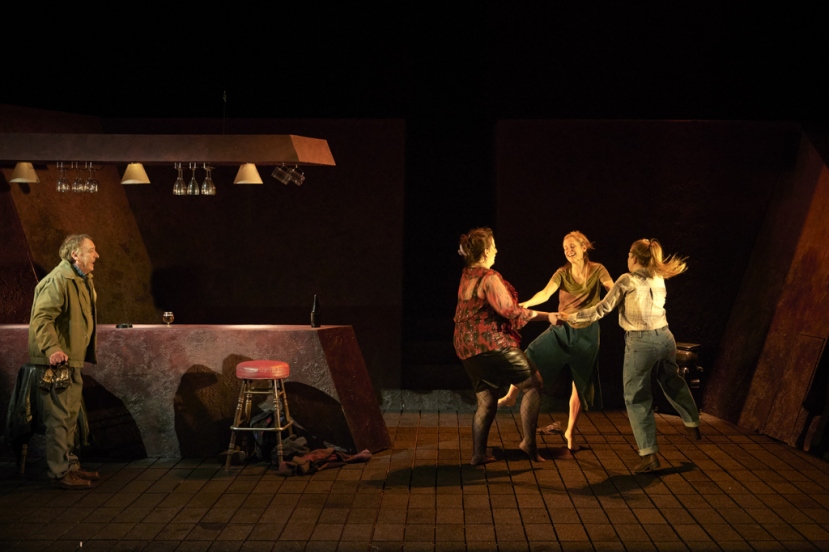