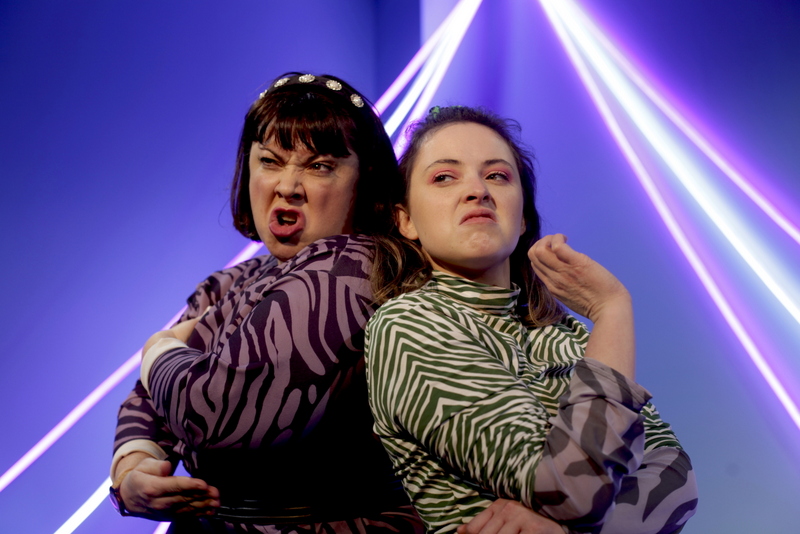 If you were among the many theatregoers disappointed when Ciara Elizabeth Smyth’s play Sauce quickly sold out at the Dublin Fringe Festival in 2019, now is your chance to treat yourself as it returns, with the same cast, to Bewleys Theatre Café.

Maura (Camille Lucy Ross) and Mella (Clodagh Mooney Duggan) are thrown together by chance in the random way that the paths of two strangers can cross, with life-changing results. Maura is at a low ebb, trying to come to terms with the discovery of a philandering husband. Mella has equal reason to feel betrayed, thrust into homelessness by a scheming uncle and a grandmother for whom she was a carer. Both women seek comfort in eating, bingeing on junk food, fantasising about takeaways and deliveries smothered in sauce. Maura’s shoplifting from charity shops (oh, the shame of it if the guys in the club found out about the wife…) and Mella’s compulsive lying are no doubt symptomatic of psychological turbulence, but Smyth steers away from any attempt at heavy theorising, exploiting the confusion and shifting narratives for all their comic worth.

The effect of the junk food bingeing leads the women to a slimming support group in South Dublin, with the unlikely title of Fat Watchers, where their paths cross. The personalities of the other women in the group are brought vividly to life by the bonding pair, as are a parade of other characters in their earlier lives, from smarmy lawyer husband to conniving uncle. By the end, we feel that these are two of life’s survivors whose lives have been enriched by their newfound friendship that will see them through whatever else life throws at them.

Directed by Jeda de Bri, the play is sixty minutes of almost unbroken hilarity, in two terrific performances, delivered at breakneck speed. A little less volume just occasionally would lead to greater clarity but this is only a trifling reservation about a production that is the perfect antidote to the dismal mood from which we are, at last, it seems, emerging; you don’t want to miss it a second time.