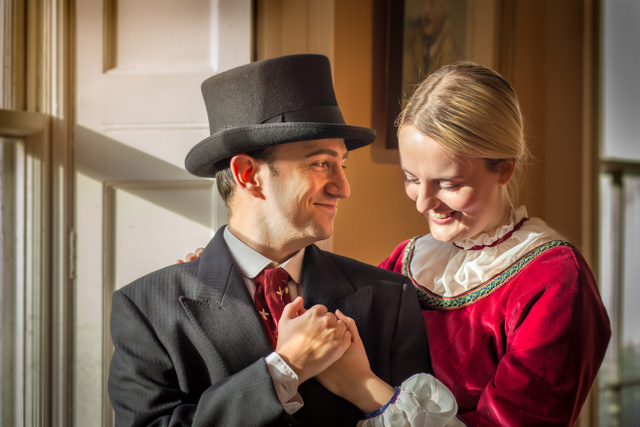 A striking feature of productions by Bewleys Café Theatre is the consistently high standard of set and general design. This revival of the company’s Dinner in Mulberry Street is a reminder of just how evocative a well-designed set can be even in as confined a stage space as Bewleys. Full credit to Martin Cahill’s set design and Rowena Cunningham’s costume design.

Michael James Ford has adapted a little-known story, Duke Humphrey’s Dinner, by 19th-century Irish-American writer Fitz James O’Brien, set in a cramped apartment on the fourth floor of a shabby tenement in New York where Dick (Kieran Roche) and Agnes (Ashleigh Dorrell), down on their luck, are living on a diet of make-believe, play acting and the memory of happier times, when food was real and sumptuous rather than a jokey recitation of snatches of menus remembered from those better days. Both are in fine form, Roche totally absorbed and convincing in his character, his timing unfailingly right.

The duo enjoys an exotic, imaginary meal in an upmarket establishment, in stark contrast with the mousetrap rations before them. The business of the “waiting” staff and their announcement of the fine dishes gives scope for theatrical flourishes which Roche and Dorrell exploit to the full. Beneath the surface of fun, however, is a well hinted-at sense of mounting, barely concealed desperation. Only a miracle can save them from total starvation and despair, but where could this come from?  Well, that’d be telling, wouldn’t it? Suffice to say that the arrival of a highly improbable deus, Giacomo (superbly played by Fabiano Roggio), from the well-oiled dramatic machina, brings the story to a finely orchestrated and happy conclusion, with more than a hint of Dickens and Christmas in the air.

Directed by Bairbre Ní Chaoimh, the play continues its run at 1 pm daily at Bewleys Grafton St., where Covid precautions are reassuringly in force,  until December 24th.