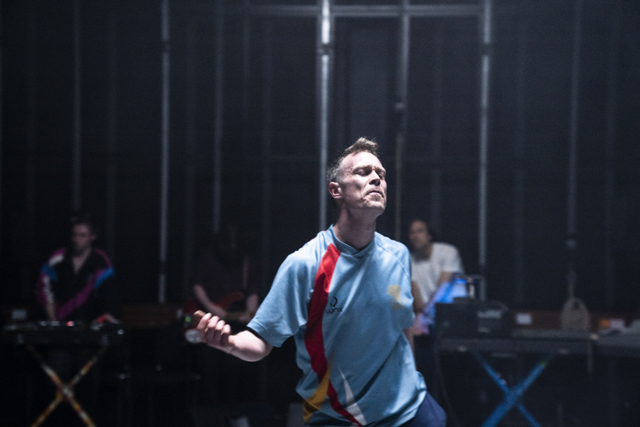 Created By Emma Martin
with music By Daniel Fox

Night Dances, playing in the round at the National Stadium, had its audience on its feet in appreciation at the end of last night’s performance. “Night Dances is not about something” advises creator and choreographer Emma Martin. She is obviously correct, but it does have connectivity between the sequences presented.

Advised on entry that there would be loud music and strobe lighting, I was glad, sitting close to the stage, to avail of the earplugs provided as the show progressed. The opening sequence was site-specific and in tone with the athletic presence visible in the boxing auditorium. This fluid sequence began in silence and was a tour de force of strength, emotion and physicality. It set the evening up so well. Then, five very young performers burst onto the stage with a blend of gymnastics and dance. It was a demanding sequence, not tightly synchronised at times, but well delivered with teamwork and agility.

The next sequence was another male dancer clad in sports gear, which was the most poetic construction of the evening. Finally, in a display of incredible stamina and timing, three veiled female dancers pulsated through a routine that emphasised the common thread that blended the four sequences together. Synchronised group movement again allowed for individuality, in a substantial and demanding sequence. The power of this lengthy piece made an impact, but nothing quite matched the opening sequence for sharpness and excellence of delivery.

Night Dances is a blend of dance, movement, agility, rhythm, music, lighting and energy. The common thread was often simple repetition, with similar rhythms, steps and gestures repeated. There were clenched fists and audience goading, as the volume pumped up to an endless pulsating sound, created onstage by a talented and disciplined live band, playing music by Daniel Fox. This three-piece band was assembled especially for this event. Fox is the bass player with indie rock outfit Girl Band and he was approached by Emma Martin especially for the event. The band played music reminiscent of Fox’s main band but stripped of the vocals, letting the dancers take centre stage. There was a heavy bass line throughout along with drones and an assortment of electronic trickery.

There was a strong cohesive sense of purpose in this production. When you notice the technicians all moving to the beat, you know this team is at one. Lighting was atmospheric, effective and innovative with a large circular light that altered the mood and emotion. My final word must go to the young performer whose lace came undone in a particularly energetic routine. She well managed her way through the sequence and then sat in repose at the edge of the stage. When she next stood up, the lace had been safely attended to… she never missed a beat!