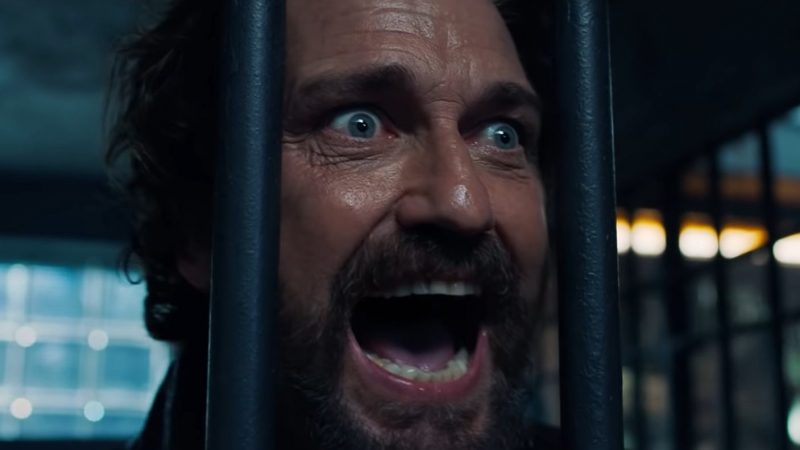 Not many people go out of their way to be sent to jail. So when the mysterious Teddy Murretto (Grillo) sucker punches a cop called Valerie (Louder) in order to get arrested and escape the person chasing him, you just know things will not end well. It isn’t long before a drunk driver is also hauled into custody. Reeking and incoherent, he is thrown into the drunk tank opposite Murretto. It turns out the drunk man is actually hit man Bob Viddick (Butler) putting on an act to get closer to Murretto, whom he has been hired to kill!

Of course, he has a plan in place to get out of his cell and get closer to his target and when the station’s firer alarm goes off it marks the beginning of all hell breaking loose. Throw in a rival hit man, a crooked cop or two and rather convenient building works that ensure there are plenty of weapons lying around and you have all the ingredients for mayhem.

This struck me as a cross between Bad Times at The El Royale and Assault on Precinct 13. There is nothing original in it but at the same time, if it ain’t broke and all that. Neither Murretto nor Viddick is a particularly nice person, so it’s not a case of rooting for one or the other. Rather you hang on simply to see who will emerge victorious.

Alexis Louder is a good foil for the pair as rookie cop Valerie but equally her hard-nosed demeanor doesn’t make her a particularly pleasant character, although out of the entire motley crew she is the one who most deserves redemption.

The enclosed setting creates intensity and director Carnahan spends quite a while engaging the characters in a battle of wills before the action properly kicks off. When it does it is as bloody and gory as you would expect. There are some well-executed set pieces and both Grillo and Butler really go for it.

There is nothing new here but it is stylishly executed and manages to keep you engaged. It’s extremely cheesy in places and has a lot of cliches but as a piece of mindless entertainment, it works!