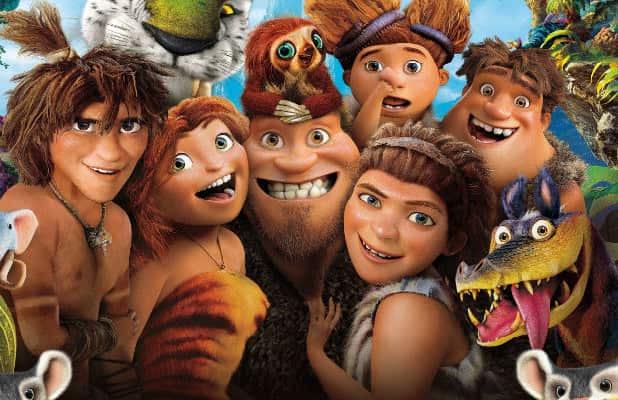 The Croods 2: A New Age – Film Review
by Fran Winston

This sequel to The Croods (2013) has been through a bit of development hell after uncertainty was cast over it once Universal acquired Dreamworks. But now that the dust has settled it has finally made it to the screen.

In case you’ve forgotten The Croods was set in a fictional prehistoric Pliocene era known as “The Croodaceous Period” hence the title. This movie revisits the characters from that film and reminds us that Guy (Reynolds) and Eep (Stone) appear to be the only teenagers in the world and are falling for each other.

However, when the rest of the Croods stumble upon a fruitful land that seems a perfect place for them to set up home, everything changes.  It is already home to the Bettermans, friends of Guy’s deceased parents, who just happen to have a teenage daughter Dawn (Tran).  But this romantic triangle is the least of the group’s worries as they upset the Punch Monkeys who inhabit the area and the men find themselves captured by them. As the rest of the family work to find and free them they encounter other nasties and throughout their trials and tribulations, they all grow as people and family.

I didn’t have any particularly strong feelings either way about the first movie. It was enjoyable enough and good fun but I wasn’t that pressed about a sequel. However, this is surprisingly good.  It’s actually extremely intelligent and well thought out and, like all Dreamworks animated fare, has enough to engage the adults while the kids laugh obliviously at a different layer of the joke.

The animation is gorgeous – but to be fair you’d expect that from Dreamworks – and the characters are surprisingly well developed for animation. You do find yourself caring about them.

This doesn’t evolve (no pun intended) the original concept hugely but it does nicely bring the story to another level and – in a rare occurrence it is actually funnier than its predecessor. A lovely family movie that should make for a nice day out with the kids!