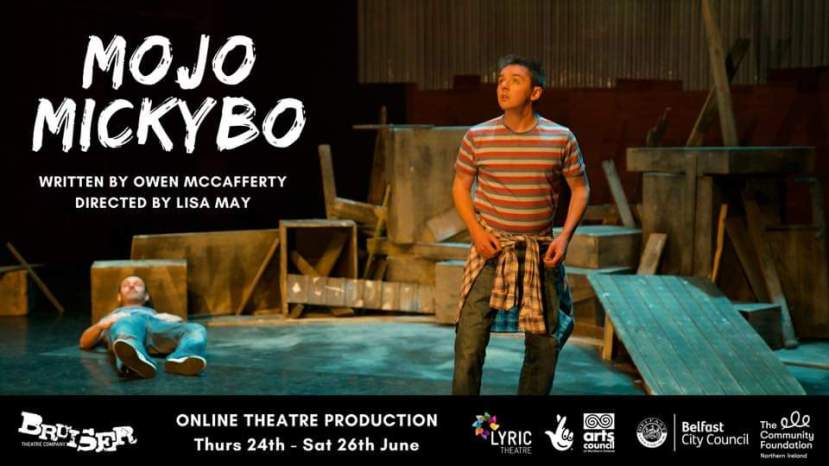 Owen McCafferty’s Mojo Mickybo might be close to 25 years old, but as evidenced in this new online production from Bruiser Theatre Company, filmed on the stage of Belfast’s Lyric Theatre; it has lost none of its verve and punch.

Set in Belfast in 1970, at the height of the Troubles, two young boys – Mojo (Michael Condron) from ‘up the road’, and Mickybo (Terence Keeley) from ‘over the bridge’ – strike up a friendship despite their different backgrounds. They share a love for the ‘flicktures’ and an obsession with Butch Cassidy and the Sundance Kid, and spend their days rolling down hills, building huts, smoking their first ‘fegs’ and dreaming of moving to Australia.

They are mostly unaware of the mayhem tearing apart Belfast and their own families. In their precious world, bombs are just an everyday occurrence and the only thing of interest about the boy in their school whose leg was blown off is the fact that his trouser leg remained intact. The only fighting that truly concerns Mojo and Mickybo is with their archenemies, local thugs Gank the Wank and Fuckface.

However, as they barrel through life, play shooting anyone they see, the realities of the political and personal upheavals on their doorstep eventually infringe on this childhood idyll.

Michael Condron and Terence Keeley play not only Mojo and Mickybo but, between the two of them, another fifteen different characters. Both actors have a wonderful ease when playing the young boys, perfectly capturing their naïve lack of guile and childhood enthusiasm without ever drifting into caricature. They display fantastic comic timing as the various characters that the two boys interact with and a subtle sense of poignancy when playing both boys’ parents, who are struggling with troubles of their own. Keeley imbues Mojo’s mother with a heart-breaking sense of defeat while Condron, as Mickybo’ s Da, shoulders the emotional heft of the play.

The strength of these performances is due in part to the supple direction of Lisa May, who handles the plays’ shifts in tone with a sensitive touch and conveys the energy of childhood through the physicality of the production. The two actors are always in harmony and their spontaneous playfulness belies some impressively tight choreography, as we have come to expect from Bruiser.

The production is played out against Stuart Marshall’s simple but effective set of corrugated iron and wooden pallets.  These become, as they would in a child’s imagination, a whole of the world, which the two actors bring to vivid, emotional life.

The horror of the very real violence that is the backdrop to the boy’s lives is hinted at in Stephen Hackett’s subtle back projections, which ground the production in its particular time. Despite the comedy and McCafferty’s striking and often hilarious word play, the sinister overtones are never far from the surface. As reality catches up with the two friends and innocence is finally lost, May touchingly guides the play to its painful, but inevitable conclusion.

While any online production will lose some of the magic that comes from a live audience, Mojo Mickybo has been subtly and simply filmed by Red Box Creative, allowing the performances the visual space to grab the viewer’s attention.

The power and appeal of Mojo Mickybo and of this production lies in its wonderfully affectionate, instantly recognisable and wholly unsentimental depiction of childhood, with that mix of aimless hanging about, incomprehensible interactions with adults and joyous bursts of frenetic play. Yet this is not just a tale of lost childhood innocence – it is much more multi-layered than that – and in the safe hands of Lisa May, Condron and Keeley at the top of their game and Bruiser doing what they do best, Mojo Mickybo sings.