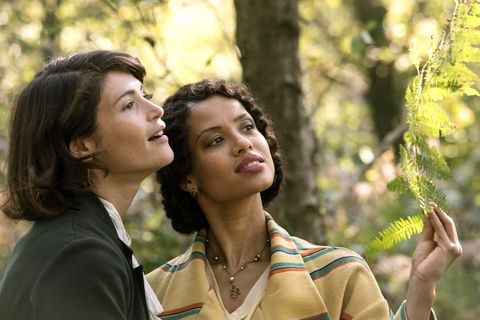 The title of this movie might sound cheery but it, in fact, refers to a pagan “heaven”. However, the characters in this movie are far from living in any sort of heaven given that we meet them in the midst of WWII with rationing and blackouts in full flow.

While everyone is doing their bit for the war effort, reclusive and independent writer Alice (Arterton) is almost oblivious to the world around her and her brusque manner doesn’t really endear her to her neighbours. Her social bubble is burst when she finds herself appointed the guardian of a young evacuee Frank (Bond) who has been sent to the coast to escape the bombings in London. Horrified at this disruption to her life she demands that he be re-homed elsewhere but his cheeky and inquisitive manner soon wins her over and causes her to reflect on her lost love, Vera (Mbatha-Raw).

While on the surface, this looks like a gentle English drama it manages to deal with many serious issues, such as racial diversity and LGBTQ rights, in a refreshing way. Alice’s sexuality is dealt with sensitively rather than sensationally. Quite often relationships like the one shown here are presented almost as titillation but with a female director at the helm that is (thankfully) stripped away.

Arterton gives a fantastic performance that is both subtle and intense. She resists the urge to overplay Alice’s hurt and anger and instead presents it as something simmering that could explode at any moment which is far more effective. The relationship between Alice and Bond is quite heartwarming and Bond brings a depth to his performance that belies his years – particularly in the heavier scenes.

The emotional turmoil of the characters and the war is juxtaposed by the beautiful cinematography. This is visually stunning and the coastal shots are particularly breathtaking. The U.K. tourist board could do worse than use this as an advertisement for staycations.

This has surprisingly more depth than you initially expect and the gentleness and beauty of it only serves to enhance the impact of the story. It’s the kind of film that takes you on a journey that you don’t even realise you’ve been on until after it ends. It is satisfying rather than entertaining and a really lovely watch.