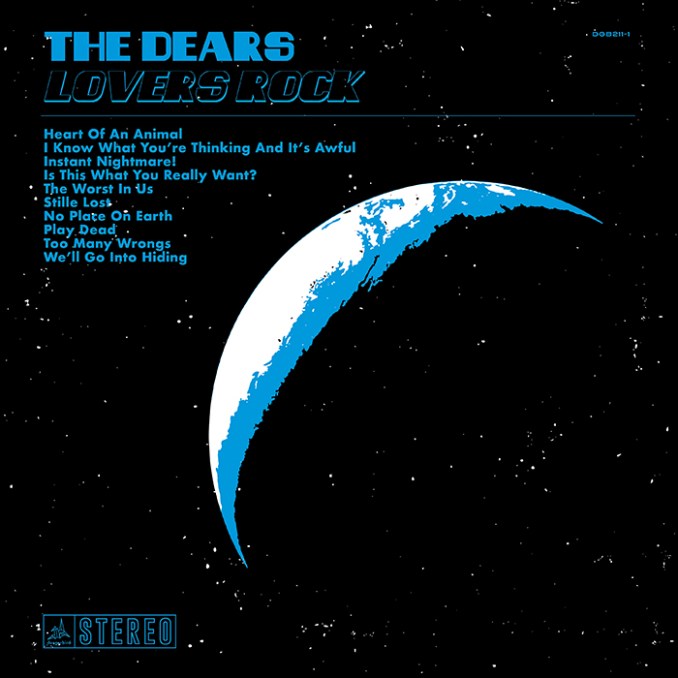 In a press release issued for the release of The Dears eighth studio album Lovers Rock, frontman Murray Lightburn may not have anticipated quite how prophetic his ode to uncertainty might become.  “Now it’s a doom that’s within our grasp. It’s in the air. It’s between us,” he says, “but we can do nothing about it.” You don’t say…

Since they emerged from the fertile ‘90s indie-rock scene in Montreal, The Dears have always been a band who have been compared to other bands. Fronted by Lightburn and his wife Natalia Yanchak coupled with their orchestral pop noir sound automatically calls to mind their country mates Arcade Fire. Lightburn’s voice recalls Morrissey at his best and the band have always worn their influences on their sleeve.

The influences are still easy to detect on Lovers Rock as their expansive, cinematic sound gives way to echoes from the ‘70s and ‘80s. Opening track, Heart of An Animal is a pounding melodrama that segues into a chilled Pink Floyd-esque interlude.  The unsettling Stille Lost channels a Duran Duran vibe, enlivened by the soaring saxophone of E Street Band’s Jake Clemons (nephew of the late Clarence).  Instant Nightmare is a throbbing ‘90s anthem that wouldn’t feel out of place on a Nirvana album.

When The Dears relax their sound, their particular brand of melodic pop/rock soars. The piano-led ‘I Know What You’re Thinking And It’s Awful’ is as unsettling as it is catchy, while Play Dead places Lightburn’s soaring vocals over a ‘70s sun-soaked feel.  Is This What You Really Want? is the most mainstream of the offerings here, while The Worst of Us is given a rhythmic, jarring tension that cuts through its swooning R&B vibe.

There is a lyrical darkness pervading Lovers Rock, with Lightburn singing on No Place on Earth, ‘I don’t know where I’m going’, but musically it sounds like The Dears know exactly where they are going, with the sometimes overplayed cinematic aspects of previous albums kept in check here in favour of well-chosen, more subtle arrangements.

The Dears continue to be complicated and catchy, melodic and dissonant sometimes all these things within the one song.  There are times when this works better than others and by incorporating so many different sounds into one album, there is a danger of losing coherence. The Dears have sidestepped that pitfall – for now.

Lovers Rock marks a subtle step forward that signals an ambition to update their sound without renouncing what Lightburn calls the ‘dumb rock music’ at the heart of what they do.