Morrissey – I Am Not A Dog On A Chain – Album Review 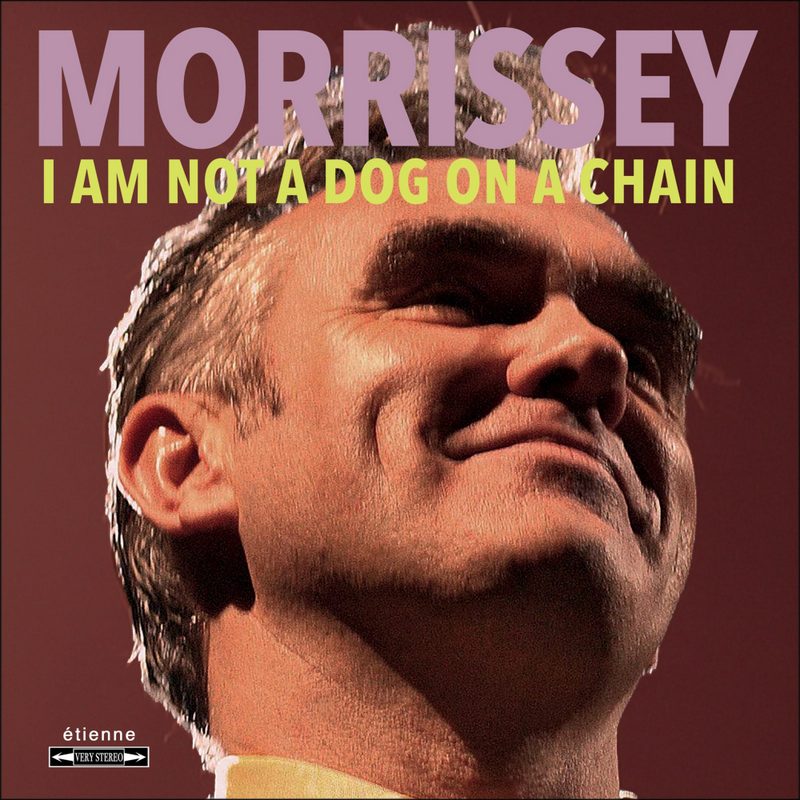 Morrissey has reached a curious position as he rolls into his sixties.  His public utterances of late have seriously dented a legacy built on The Smiths and seemingly copper-fastened by his mid-noughties album You Are The Quarry.  As a result, many have turned their back on him at this stage.  With such a backdrop it’s difficult to be truly excited about his thirteenth solo album, following quickly after last year’s underwhelming covers collection California Son.

But what about the music?  Although it’s not a particularly long album at 11 songs and 49 minutes, the effect of listening to it can be exhausting at first.  Jim Jim Falls, despite its busy arrangement, has a fairly typical late-period Morrissey feel to it, with a strong melody and lyrics that only he could write (“if you’re going to jump, then jump… if you’re going to kill yourself then for God’s sake get on with it”).  He clearly still has a gift with music, songs like Bobby Don’t You Think They Know (featuring Thelma Houston on strident backing vocals) and Knockabout World have strong melodies that sound so instant, you’d swear you’ve heard them before.  There’s nothing wrong with his singing voice either, Love Is On Its Way Out is another catchy song with strong vocals.

The title track has a jaunty melody and arrangement, in keeping with its title to hammer home a somewhat ham-fisted message (“I am not a dog on a chain, I use my own brain, I do not read ‘news’papers, they are trouble makers”).  He still has a fixation with politics in the unusually country-sounding What Kind of People Live In These Houses, he points the finger: “they vote the way they vote – they don’t know how to change, because their parents did the same”.

Some of it doesn’t quite work – Darling, I Hug A Pillow has trumpets which are… distracting, then he has gone down the ‘mariachi horn’ route a little on recent albums (The Bullfighter Dies on 2014’s World Peace Is None of Your Business for one).  Once I Saw The River Clean has busy synths throughout, distracting from some wistful memories of a “windblown Chester Road” and “45 pence to demand Metal Guru”, while The Truth About Ruth has mandolin and zither to accompany clumsy rhyming for the sake of rhyming (sleuth/truth/youth/Ruth).  None of this is any better than that sounds.

Of late he has saved his stronger material towards the end of his albums, and here is no exception.  The Secret of Music has Morrissey crooning in a higher register over a steady, pounding beat on a song that doesn’t particularly sound like anything he’s done before and works well.  My Hurling Days Are Done has him in looking back mode, with a relaxed arrangement that allows his voice to dominate.  It’s a warm piece of music with a hint of, of all things, Queen’s Bohemian Rhapsody, and the best thing he’s done for, well, at least four years.

It’s a decent collection of songs that fans will certainly enjoy, but the casual fan will wonder what the fuss is about.

Bobby Don’t You Think They Know