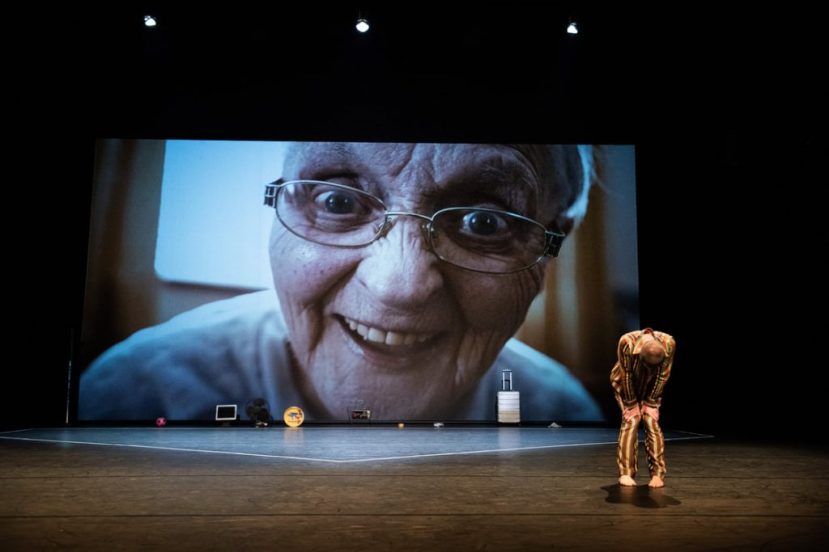 At the start of this new work by Philip Connaughton, we see a short video piece of Philip and his mother. She is quite elderly and suffers from some form of dementia. Philip wakes her in the morning and then gets her ready for the day ahead, washing and clothing her. These are intimate moments between the pair which he has chosen to share with the audience.

This is a wide-ranging new piece by Connaughton that features dance, spoken word and video segments. There is also some audience participation for a crazy game show segment! There is a feeling that anything can happen in this production. It captures a sense of madness while exploring some difficult and complex issues.

As the three performers arrive on stage they are dressed in similar clothing; a wonderful floral print suit, with a shiny silver shirt underneath. They sit on three chairs under a spotlight. A voice from the heavens asks them a series of questions, both intimate and inane. When were they born? Who is the president of their country? Is cereal really soup? They answer as best they can, stammering their comments to the unseen power.

The piece includes three spoken-word segments, one by each of the performers. We hear a story about someone finding out they are HIV positive. Another tells of their parent’s reaction when they find out their son is gay. The final piece tells of Philip in his early years and how he learned to love dance! Whether these stories are true or fabricated is not clear, but they invite the audience into the performer’s world and make us confront these difficulties.

There are also dance segments, as you would expect from Connaughton. There are three dancers and each performer completes a set of motions. These are sometimes simple and repetitive, whereas other motions are complex or just plain dangerous! You keep expecting the dancers to fall into unison but it never occurs. While Connaughton’s work is always more than a simple dance performance, this production is a step closer to theatre than what we have seen before from him. The audience is allowed into his confidence and we see and hear some of the most private moments in his life. The love between himself and his mother is there for all to see!

Funded by The Arts Council of Ireland.