End of the Century – Film Review 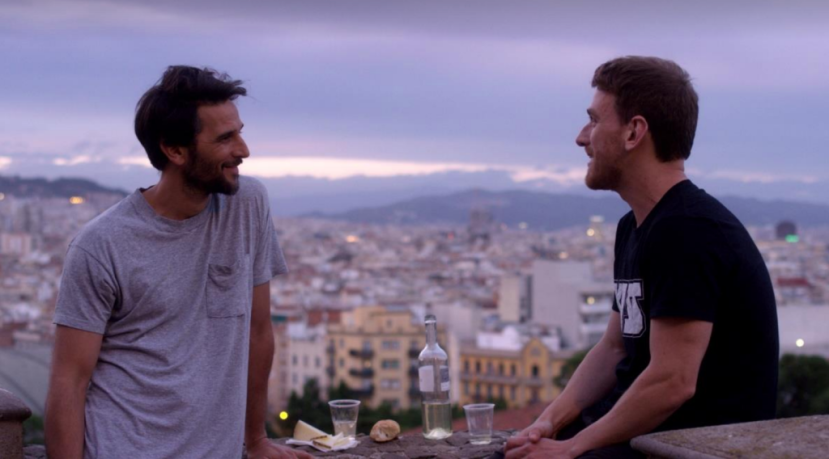 End of the Century – Film Review
by Frank L.

This is Argentinian director Lucio Castro’s debut feature film as writer and director. It had its premier at the New Directors/ New Films 2019 festival at MoMa in New York. It is set in Barcelona where Ocho (Juan Barberini) has arrived to stay in an AirBnB. He is as free as a bird. He looks out from his balcony window at the comings and goings of the street below. He goes to the beach and watches Javi (Ramon Pujol) who also appears at a loose end, but they do not make contact. Next day he espies him again from his balcony window and calls to him, clad as he is in his “KISS” T shirt. Javi duly enters the apartment. About ten minutes by this stage have passed and the first words are spoken. It transpires that Javi is based in Berlin and staying in an AirBnB next door. They find the horizontal quickly and canter through a necessary conversation about PReP and condoms.

When a more substantive conversation emerges it transpires they had met before at the end of the century in an apartment owned by one Sonia (Mia Maestro). One of the problem with the films is that neither of the participants has apparently aged notwithstanding the intervening twenty years. It is difficult to discern what happened then and what is happening now. There is a strong need apparently in Ocho and Javi to find someone, both have had relationships which have not worked out. So Castro shrouds in a mystery what each is searching for but each appears to find a great deal of interest in the other.

There are fine shots of skylines and buildings and the two protagonists have a keen sense for aesthetics. The rapport between the two of them just about holds everything together. Notwithstanding its small story line, the film has an ability to return to the consciousness long after you have left the cinema. This indicates that it may be more substantive than the initial reaction first suggests. Indeed, it may well be a film that needs to be seen a second time to sort out its diffuseness but that is a bit of a luxury item with a first feature film.