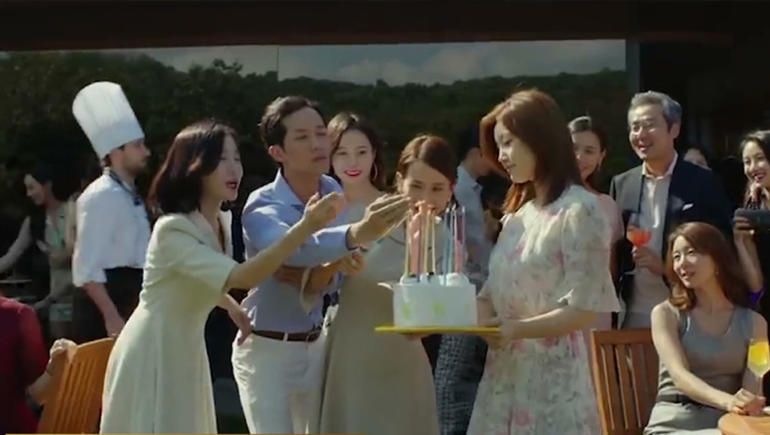 Arriving on these shores almost nine months after its Cannes premiere, trailing dozens of international awards, Bong Joon Ho’s Parasite has a whisper of a chance of becoming the first foreign language film to win the Best Picture Academy Award.  That it probably will not claim the title is no reflection on the film’s quality – it is, by some distance, the best picture on this year’s generally uninspired shortlist.  That being said, the degree to which it has caught the world’s imagination is as much to do with its impeccable timing as the undeniable finesse of the filmmaking. Bong has made more interesting and unusual films than this, certainly, but never one that felt quite so of the moment.

The film’s abundant pleasures deserve to come as a surprise.  To give the barest outline of the plot, it involves two families of four in South Korea – one the summit of bourgeois toxicity, the other barely scraping by.  Through a combination of insight, ingenuity and – well, it must be said – screenwriting contrivance, the ‘have-nots’ manage to infiltrate the home of the ‘haves’, posing as assorted forms of domestic ‘help’.  Naturally, everybody’s plans meet unforeseen complications, although the precise nature of these complications is both genuinely startling and brilliantly cinematic.

And yet.  Parasite is a fascinating case study in how a film can be, at the same time, moment-to-moment unpredictable and top-level schematic.  This isn’t necessarily a criticism – the pleasure of genre, after all, involves giving us what we expect, but not in exactly the way we expect it.  Bong has always been a master at this tricky balancing act, and even in a film like this – which scans more ‘realistic’ than, say, The Host (2006) or Snowpiercer (2013) – his skill is as sharp as ever.  There are sequences – particularly in the middle of the film – where the choreography of camera, setting and performers has the kind of minute intricacy and hair-raising inventiveness that is more often the domain of animation than live action.  There’s also, as ever with Bong, a certain episodic ‘blockiness’ to the story construction that doesn’t quite match the elegance of its purely cinematic values (a near magic-realist interlude involving one character’s unusual allergy feels almost like a discrete short film, with its own, slightly jarring, tonal identity).

None of these reservations make Parasite anything less than a must-see.  The performances are uniformly excellent – with an affecting Kang-ho Song as the underclass patriarch, and a sly Yeo-jeong Jo as the pampered trophy wife registering particularly strongly.  The whole thing moves with a sense of purpose that makes its two-hours-plus running time sail by, even as small, telling details bubble to the surface (the constant invocation of America-as-status-symbol is particularly telling).  Above all, the film is ruthlessly entertaining – its most productive tension coming perhaps from how its pure pleasure as cinema plays both with and against the roiling sense of injustice at its centre.