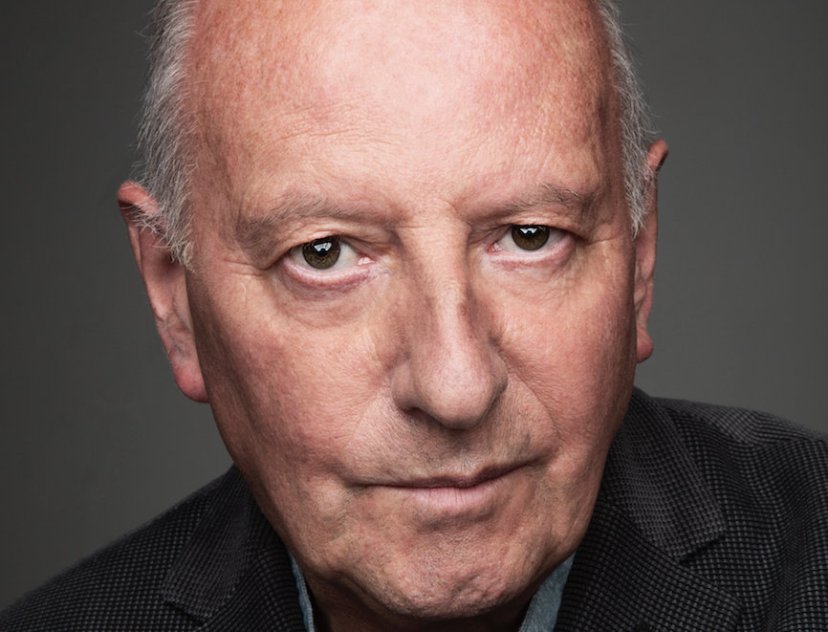 The Curious Works of Roger Doyle in Cineworld, Dublin now for a limited run and The Eye, Galway from Nov 1

How long have you known Roger? When did you first hear his work?

I heard about Roger way back in the early 90s when I first became interested in making films and I did a course on filmmaking in Dublin, in Filmbase actually which has now closed down. One of the speakers showed us a short experimental film called “Emtigon” by the pioneering Irish filmmaker Joe Comerford. The film was a strange experimental black and white film, with very striking imagery and a truly haunting and bizarre sound track. I was really taken by this film as I don’t think I had seen an experimental art film before and then in the end credits, it came up “music by Roger Doyle” and so I was immediately intrigued by Roger’s work. Later, I saw Cathal Black’s film “Pigs” which was made in 1984. It was one of the few Irish films that got made in the 1980s and seemed to capture that sense of a crumbling, grungey Dublin which I remember and at the end, there is this wonderful end sequence as the main character is being taken away by the Guards and this very powerful and ominous music kicked in and the music greatly enhanced the ending of the film, giving it a certain dramatic power and resonance. Then in the end titles there was that name again; Roger Doyle. So I was intrigued by Roger’s film soundtrack music long before I finally met him at the Galway Film Fleadh in 2004.

Why did you decide to start filming Roger? Was it clear from the start you wanted to make a full documentary about him and his work?

Shortly after meeting Roger, he handed me a CD, one of the 3 volumes of a major work of his, entitled “Passades”. I listened to it on headphones, in a quiet place and the epic, haunting nature of that work really took me to another place. It was spellbinding, it was electronica, a music genre I always loved but it was electronica on a biblical scale, like nothing I had ever heard before. That was back in 2004 and I thought to myself, this really is music for the 21st century, it’s what the future was always supposed to sound like, the future sounds like Roger Doyle’s music. He let me use a piece from “Passades” in a short film I made which did well on the festival circuit. I began thinking then there was something to this Roger Doyle character and I decided to make a documentary about him and so I started filming his concerts. Initially, there was no interest at all in a documentary about Roger Doyle but I continued filming him playing live as they were often exciting and bizarre nights, never dull and thinking to myself, one day I will use this to make a documentary. 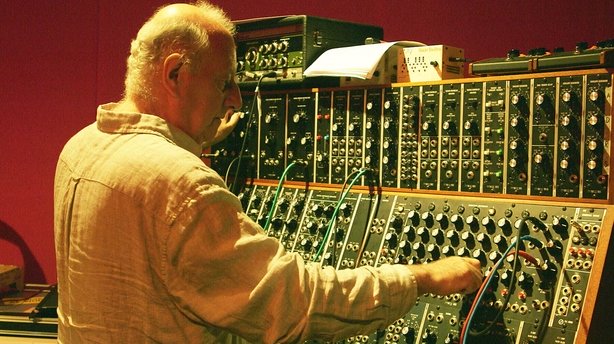 The documentary was shot over ten years. How many hours of footage did you have to choose from?

There was hundreds of hours of footage over that period but much of the early footage was just of concerts. Actually, only small clips from that footage made it into the final film. The final film is largely composed of the material I filmed in 2016 and 2017 when I knew exactly what the form of the documentary would be and there were processes to film like the preparations and staging of his first electronic opera, a process that I built the documentary around and then interviews with his many collaborators such as actress Olwen Fouere, the director of the Gate Theatre, Selina Cartmell and the pioneering early Irish film makers that Roger had worked with. I also managed to get Dave Fanning in there as well as I filmed an interview that Roger did in RTE.

When you are filming over such a long period of time, how do you know when the documentary is finally finished?

Well for a long time, I struggled with this documentary as I was looking for a compelling structure for the narrative and I wanted a positive ending. I didn’t want to make a film that just showed a talented but obscure composer talking about the past and languishing in obscurity. I wanted to document Roger doing exciting work right now. When Roger told me in 2015 that his electronica opera “Heresy” was finally funded, I knew then this really was the time to make that Roger Doyle documentary and build it around the launch, rehearsals and then finally the opening night of the opera in November 2016. The opening night of the opera, turned out to be a great success, actually one of the best things that Roger ever did so that was how the documentary would end, on a high note. Along the way, I would cut back to Roger’s earlier work and I had certain sections of his music that I definitely wanted to explore in the film like “Passades”, his work with Olwen Fouere and the film soundtracks. The film also features several tracks from “Time Machine” an album he brought out in 2011 which is one of his very best works and is a series of tracks largely built around voices captured on Roger’s answering machine, including a very poignant piece built around a poetic monologue by the last journalist Jonathan Philbin Bowman. I wanted Roger to open up a bit during the interviews, as he can be quite guarded and private. He finally did that when I quietly filmed him working alone in his studio and there is a wonderful moment where he listens to a track from “Time Machine” that used the voices of his deceased parents, personal messages left from many years ago which he set to music, resulting in a haunting and beautiful soundscape.

However, as Roger’s back catalogue is so vast and is spread over 40 years, I could have been filming this for even more years to cover everything. I listened to every album Roger brought out, they were 29 of them at the time and more since, and compiled a list of all the pieces I wanted to include in the film. Due to time pressures, I didn’t get to include everything and made some controversial omissions but for a film that’s 1 hour 45 minutes, I think I have captured the essence of both his superb recent work and his early, ground breaking pieces. To fully cover all of Roger Doyle’s music, would probably take a 6 part television series, with each episode 50 minutes long, that would just about include everything.

The film was never an attempt to cover every piece of music that Roger did, it’s not a Wikipedia article. At its core, the film actually tells the story of a hugely talented but over looked artist who gets a chance, late in life, to put on a very ambitious opus; his first opera, perhaps Ireland’s first electronic opera. I think that notion of getting a golden opportunity late in life, for someone so hardworking and dedicated, yet overlooked, is very appealing to an audience. 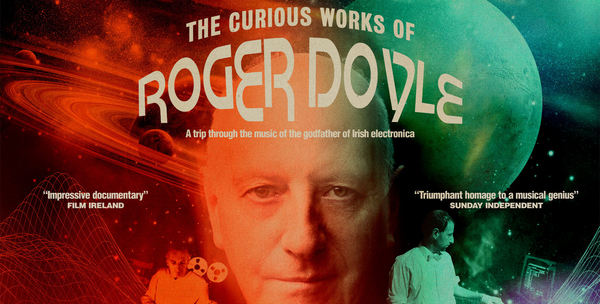 It is surprising an artist as skilled and unique as Roger isn’t better known. Why do you think this is? Is it simply that he was ahead of his time or is it down to luck?

I think it was both. I very much felt that “Passades” was ahead of its time and in the years after “Passades” came out, I could hear echoes of that work in film soundtracks and even in the dance music genre dubstep which was popular in the late 00s. For the most part, his music was unlike anything else being done in Ireland and can be an acquired taste.

At one point in the 80s, Roger and Olwen Fouere brought out pop songs through their theatre company and band; Operating Theatre. Bono even produced one of his Roger’s singles through Mother Records. Those tracks are still good but that pop career didn’t quite take off.

Roger Doyle is almost his own genre of music as there are remarkable differences in style and tone between his many albums. Some of his minimalist piano work, as can be heard in “Time Machine” is similar to other artists such as Michael Nyman and Philip Glass. Perhaps if he had a very good manager who at one point insisted he stick to a certain genre all the time, he would have become as well known as those composers but I can’t imagine Roger ever being confined to any pigeon hole and that’s why it’s so intriguing to explore each new album of his, as he genuinely experiments and his work continues to surprise and sound daring and fresh. I had floated the notion with Roger of organising a super concert with him, Michael Nyman and Philip Glass, it would be spectacular but that’s another day’s work.

Roger seems to be hugely driven with an endless work ethic. Is this another topic for the film?

One of the character traits I greatly admire in Roger, is his relentless work ethic and I also see that in his long time collaborator, actress Olwen Fouere as well. Both of them are totally dedicated to their art, and work non-stop, always pushing the envelopes in their respective fields. I think it’s this steely determination to constantly create and to experiment and innovate, that has led to Roger achieving, what filmmaker Joe Comerford called “the level of mastery” in his music. Roger was presented with the Saoi award by president Michael D Higgins back in August. It is the highest award in Ireland for artists, with previous holders such as poet Seamus Heaney and writer Edna O’Brien. Roger is of that level in his field, even if he is not as well known as those other recipients of that award.

Are there any other projects similar to this bubbling away on your back-burner? What have you planned to work on next?

I am planning on doing two more feature documentaries, made almost back to back. I spent over 10 years on the Roger Doyle documentary so am hoping those two will be made a bit faster. I have already began filming one of them. Both are about artists again. One film has hardly any budget and is a small film about an exciting young British artist that constantly intrigues me. The other documentary is much bigger, it already has some decent funding and is about someone quite famous. That one could be my most mainstream film to date. I also have quite a few of my screenplays hanging around my office, just waiting to be made into films. To make all that happen, I really do have to attain that same work ethnic as Roger Doyle.