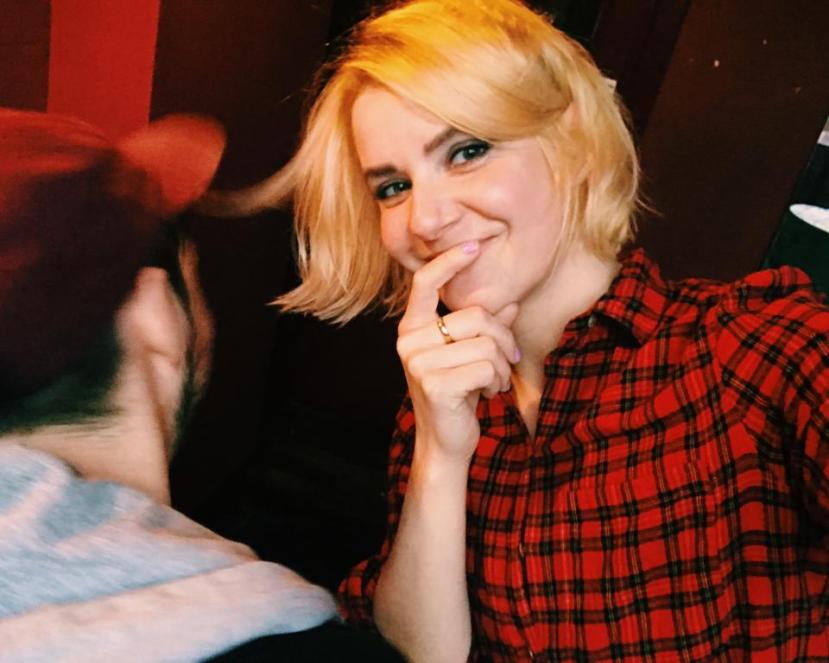 Al Dawes F*cking Loves You is performer and writer Erin McGathy’s third Dublin Fringe Show offering, following the phenomenal MurderTown in 2017 and last year’s Witches and Dogs, an improvised show with Ben Seeder. McGathy, an American comedian, might be familiar to some readers from the TV comedy series Community or from the documentary about Community’s creator, Dan Harmon, Harmontown. McGathy and Harmon were at one time in a long standing relationship which culminated in a short-lived marriage after which McGathy moved to Ireland.

Ordinarily such insights into a performer’s private life have no place in a fringe show review. However, this show is an exploration of this dysfunctional relationship with the twist that the fictional stand up artist, Al Dawes, is retelling the history of their relationship as if it were his own.

The stage in The New Theatre is bare but for a rug, a high stool and a table. Dawes comes on stage in trucker wear; check shirt, jeans, boots and cap. He has a five o’clock shadow and carries a bottle of polish beer on stage. Dawes explains to the audience that he is back on the comedy scene after a break and goes through his illustrious career. Some of Dawes routine falls flat and other parts gets raucous laughter from the front row. Suddenly the lights dim on the stage and a disembodied voice begins to question why McGathy is approaching this autobiographical material in such a removed way. A push and pull ensues as McGathy battles the voice inside her head.

Make no mistake from the programme or the poster that this is anything other than a profound exploration of the aftermath of domestic abuse. McGathy battles with her demons on stage as she confronts her fears over her past relationship. His constant belittling of her, in both public and private, chipped away at her confidence. The most shocking part of the production is when they play a recording of an argument she had with her husband, his tone and words causing a chill over the audience. And we, the audience, wonder are we complicit in this abuse as we laughed at Dawes, or even at Harmon himself. It is a brave piece of theatre which is raw and vulnerable. It is a show you wish that McGathy didn’t have to make but shows you how astonishingly strong she is for making it.