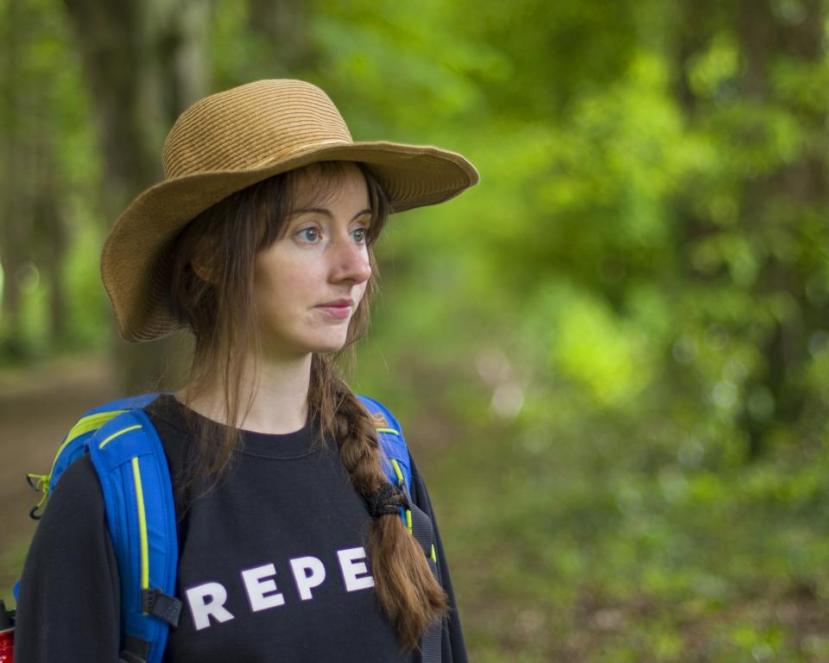 We had the chance to put some questions to Miriam Needham about Compostela, which runs in the New Theatre later this year. We discussed the birth of the project and the Fringe Lab, among other topics. You can see the results below!

Performances – 11 – 14 September at the New Theatre

How did this project come about? What inspired this work?

I wrote ‘Compostela’ while on a Short Theatre Artist Residency at the Hawk’s Well Theatre, Sligo, in 2018. They gave me time, space and financial support to focus on my own work. It was a four week residency, and after two weeks of writing things and scribbling them out again, I began to write the first draft of ‘Compostela’. I put great value on those first two weeks however. Sometimes I think that there is an inevitable frustration when it comes to creative work. But you have to go through the frustration to make the thing, otherwise you’d never make anything. So I’m very grateful to the Hawk’s Well for that time to think and make mistakes!

The play was inspired by the real-life struggle of using the tools of a system to try and change the system itself – or, more specifically, trying to fight the patriarchy whilst being indelibly inside of the patriarchy, which we all are.

I’ve had lots of feelings about the movement for reproductive rights in Ireland and about the referendum campaign last year. Writing this play was a way for me to express them (and it’s cheaper than therapy). I don’t find it easy to speak in public as myself, especially about these kinds of things, so I wrote a play.

I’ve heard it said that if you want to really know a writer, read their fiction, not their autobiography. It’s a bit similar here. ‘Compostela’ is a complete work of fiction, totally fantastical and surreal and absurd and magical, but it’s also honest.

Can you tell me about the Fringe Lab and how it works?

The Dublin Fringe Lab is an amazing resource – they offer a studio, free of charge, year-round to theatre artists in Dublin. They also have a foyer you can drop in and work in free of charge, as well as a small room called The Cell, specifically for writing. It’s just brilliant for freelance theatre artists who live in Dublin. I don’t think working from home is good for the head, and it’s certainly less productive for me anyway. There’s only so many coffees you can buy with an artist/freelancer’s income. So what I’m saying is that the Dublin Fringe Lab is an anti-capitalist, pro-artist beacon of hope in a Dublin otherwise turning slowly into one large hotel. They’re legends.

Were you involved with the Repeal campaign?

I’ve been involved with the campaign for reproductive rights on and off since 2014, when I moved back to Ireland from France. I followed the news angrily for a while from abroad and then once I moved home had to put that angry energy somewhere, so I joined the Abortion Rights Campaign.

I just did what I could when I could: street stalls, fundraisers, helping out with the March for Choice, any other odd jobs that involved carrying odd-shaped object different places (which theatre had already prepared me well for).

In the time leading up to the referendum I mostly delivered canvassing workshops and went canvassing myself, in Sligo, Leitrim and Dublin.

I’ve met lots of wonderful people through the campaign for reproductive rights, and indeed the campaign is still going, because the legislation brought in only serves those who are privileged in certain ways. The Leitrim Abortion Rights campaign are still going strong, and they won’t stop until there is free, safe, legal, local access for all those who need it. They’re probably the coolest bunch of people I’ve ever met and – don’t tell any of the other activists – but this play’s actually for them.

Have you done the Camino, or do you intend to in the future?

I did indeed do the Camino! Or, well, part of it – only from Sarria to Santiago. I did it around a month after the referendum last year – but that’s where the similarity ends. Nothing that happens in the play happened to me when I did the Camino. I kind of wish it did, but no, I did not go on any spiritual or emotional journey while there. That took a lot longer, and is still going!

The Camino felt like a good situation in which to explore burnout. Your feet are in pain, but you just keep going.

You have worked with Blue Raincoat in the past. Will you be using any of their techniques or ideas in this new work?

Not particular techniques or ideas, no, but I will be trying to emulate Blue Raincoat’s constant striving for excellence! The dedication and commitment in Blue Raincoat’s work is incredible, and I always feel lucky to be in the room with them. I’ve learned different things from every company or organisation I’ve worked with – and the main thing I’ve learned with Blue Raincoat is always to be looking for more detail, more richness, more ‘alive-ness’ in the work. So I try to take that with me everywhere.

Have you performed in a solo show before? Do you find it daunting or exciting?

I’ve never performed a solo show before, let alone one I’ve written myself! It is both daunting and exciting. I’m really excited about putting something out on stage that I’ve written myself, and I’m terrified also, but in a good way. The main thing I try to remember though, is that it’s only theatre. If I fail completely, who cares? I’m living a privileged life to even be able to do this. I might as well go for it fully and perhaps fail spectacularly, rather than just make an ok piece of theatre.

Actually, the only bit I’m not looking forward to is the bow. I find it awkward enough to stand on stage and accept the applause at the best of times, but on my own?! Maybe I’ll just exit as soon as the performance is finished and pretend it’s part of the play …

What else would you recommend for the Fringe Festival?

Well I really wanted to see My Fringe Show by Sarah Devereux, but I believe that’s sold out! I’ve no doubt the people who have tickets for that are in for a real treat.

I’d quite like to go to Black Jam by Fried Plantains Collective, Ode to a Postcode by Freshly Ground Theatre, Púcaparty by Glitterhole and Two Fingers Up by Seón Simpson and Gina Donnelly. I’d love to go to everything though really. I don’t imagine I’ll be able to make it to any shows on the days that I’m performing myself … good thing I’m only on during the first week of the festival!