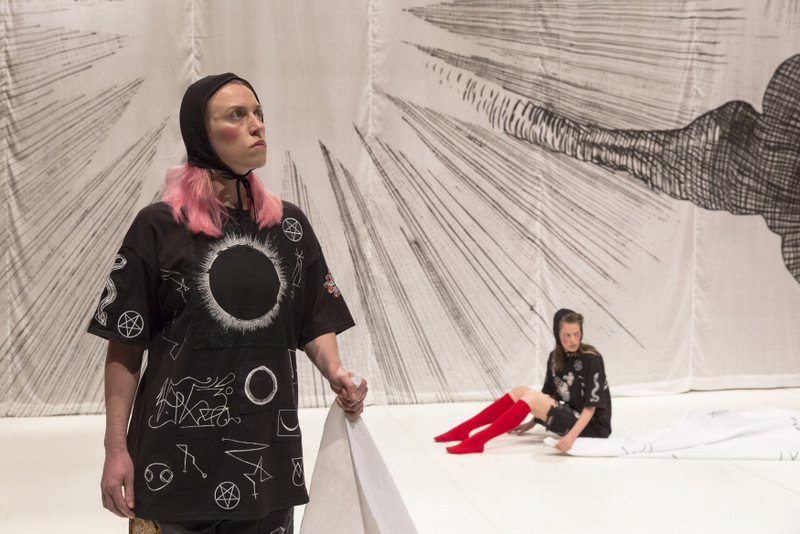 My friend and I stand and turn to look at each other after the hour long performance of For Now We See Through A Mirror, Darkly in the Project Arts Centre, we tilt our necks and stretch our arms in an effort to decompress their tightened muscles; it is as if watching a show, normally a passive and effortless experience, had put us through some gruelling workout. Walking away from the theatre we agree on the riveting and intriguing nature of “this eerie and mystical dance performance” as Louise Ahl (Ultimate Dancer), its creator describes it in the notes to the programme of the Live Collision Festival.  Above all though, we comment on the effect of the intense physicality of the performances, which at times I watched as tensely as if witnessing a tight rope walker suspended in mid-air about to risk a disastrous fall. The title of this mixture of dance and live performance art points at Louise Ahl’s interest in the metaphysical and mystical by alluding to the well-known passage by Saint Paul in Corinthians where he points at the imperfections and distortions of our earthly experiences. It also foregrounds her collaborator Juliana Cape’s work with the visually impaired. The strong physical and sensorial nature of the piece highlights these concerns from its very beginning, with three mysterious, and mysteriously clad, figures played by Ultimate Dancer, Jo Hellier and Peter McMaster, positioned on a bare stage against a backdrop featuring what look like two explosions and a heart shape that is later revealed as a two pronged snake tongue. For a few minutes the three performers, kneel, sit and stand in triangular formation, whilst clutching pieces of canvas with cryptic symbols and letters painted on them. Their bodies barely move with the exception of some mechanical neck craning but the eyes of Ultimate Dancer and Jo Hellier dart around the room to occasionally fix a piercing stare at some point beyond the audience, as if able to see something that stands behind us or before us that we cannot see ourselves. It is an unnerving and intriguing opening and it sets the tone for this intense and minutely imagined piece.

The piece is structured around four parts or “phases”, which a voice over who professes to interpret that “which is hiding in plain sight”, describes as dry, cool, moist and hot respectively. The three mysterious figures of the opening, later identified in the “moist phase” as the dying sun, a dangerous snake and unclean slime, go through a movement journey that takes them from a “relentless cycle of meaningless peekaboo” in the “dry phase” through to the arrival and impact of a celestial body in the “cool phase” and a thrice-repeated set piece revolving around the movement of the aforementioned sun, snake and slime, to their final “die-gestion” where they become “an indestructible and permanently bleeding heart”. Each of the phases is profusely, poetically, and at times humorously, narrated by the voice over, and starkly lit in a chromatic scale that moves from black, to white, to yellow (accurately and amusingly described by the voice over as “dehydrated pissy light”) to the final red of its closing “hot phase”. This voice over, which was partially conceived to guide the visually impaired through the performance, is also the skeleton on which the flesh of this highly sensorial piece rests, revealing and amplifying the conceptual blueprint behind the performances on stage. It not only allows the audience to see, but to see with and beyond the three figures on the stage, reveling on the physicality of what we are already seeing and revealing that which we cannot see. Voice over is generally thought to be the result of narrative shortcomings in a dramatic piece and thus to be kept to a minimum but here it is not only well integrated but integral to the artists’ intentions to tease out the nature of belief and the limitations of sight. Its parsing of the human body variously itemized with reference to “its taste hole”, “meat cauliflower”, “flesh branches” and “flesh sticks” and, most importantly given the title of the piece and its concerns, its “two seeing jelly balls”, matches the tightly wound choreography developed for the piece. As it befits a dance performance, the body becomes the centrepiece but it does so in its minutest expression, resulting in movement that is intense and repetitive. The miniscule nature of most of the movement requires performances that are as restrained as they are physically demanding. Particularly riveting was a set piece revolving around discontinuous but harmonious chanting paired with small movements of the neck and head that required an extraordinary level of concentration and coordination on the part of the performers. Another high point in the piece was a “motif” repeated three times: starting with an initial voiceless performance where the audience where cautioned to close their eyes and followed by two iterations that described the movement for the visually impaired, to then add a symbolic and narrative reading of the choreography.

For Now We See Through a Mirror, Darkly strides the border between contemporary dance and performance art to find a unique way to match physical performance with abstract ideas. Its creator, collaborator, and performers have created a script, choreography and visual and sound scape that challenge the audience’s expectations regarding what can and cannot be seen on stage. 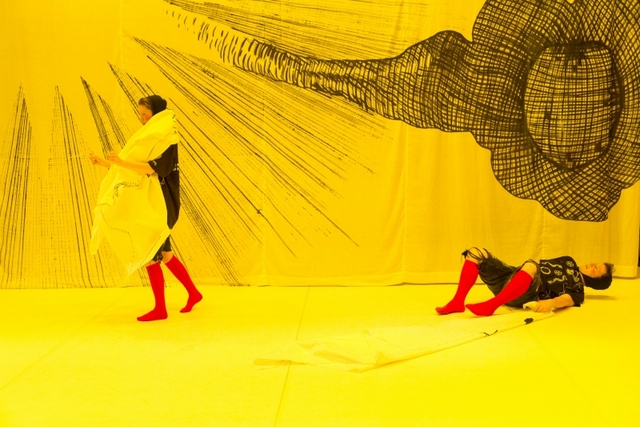