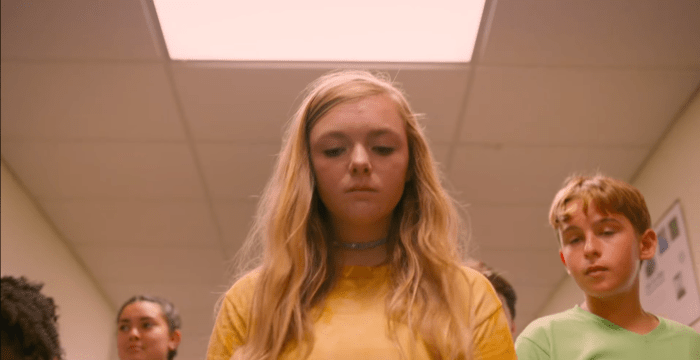 This is the story of Kayla Day (Elsie Fisher), a young girl who is struggling with the transition from being a child into being a young woman. The film takes the form of a fly on the wall documentary along with a series of video blog entries where Kayla gives viewers a not terribly accurate account of her life. She lives with her Father Mark (Josh Hamilton) with no sign of their mother. The film is a short slice of life for the average teenage girl in high school.

The film is something of a shock as writer/ director Bo Burnham has nothing in his past history that would make you think he is capable of this work. He’s mostly known as an actor, and even at that, there’s nothing particularly exciting in his back catalogue. This film is a very impressive debut and is very different from most of Hollywood’s offerings.

There is an obvious elephant in the room and that is Boyhood, the 2014 Oscar winning release by Richard Linklater. This film owes a substantial debt to that release in style and subject matter. This film is quit different, dealing with a shorter period of life and delving into the mind of a teenage girl. There is also the obsession with social media that has come to pass even since Boyhood. Lead actress Elsie Fisher gives an effortless account of the trials and tribulations of the average teen. Don’t expect any full sentences though, as they’re, like, so totally uncool!