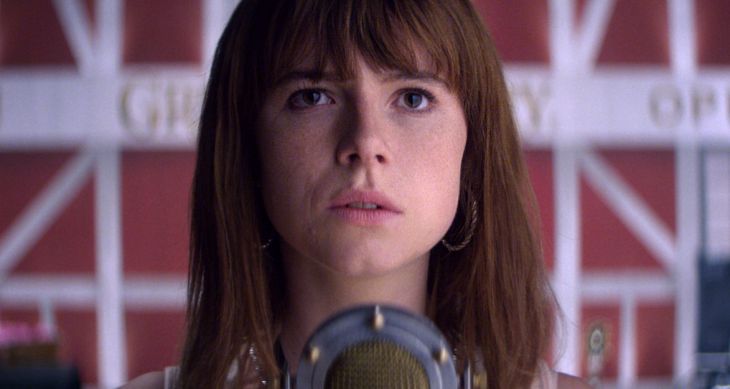 Rose Lynn Harlan (Jessie Buckley) is an unmarried mother of two young children in Glasgow. The film begins with her being released from jail with an electronic tag affixed to her. Her first move when released is not to the home of her Mum Marion (Julie Walters) who has been looking after her kids but to see her boyfriend. The children are not her top priority. She dreams of fame and fortune as a singer in Nashville. It is that dream which drives her and everything else comes a poor second.

One of her failings is her ability to pick a fight with anyone who crosses her path and when she does there are no half measures. She goes for it. Early on she has a filthy row with the people who run the local ‘country and western’ venue. However, she needs work and surprisingly, with some subterfuge, she lands a cleaning job in a posh house whose owner is one Susannah (Sophie Okonedo). Rose Lynn as a cleaner reveals her ability to sing and generally perform as she carries out the mundane task of hoovering. She dreams she is singing in Nashville as she cleans. These are terrific sequences and Buckley excels as she sings her heart out.

The relationship between Marion and Rose Lynn is a fraught one. Marion reprimands her daughter for her feckless behaviour towards her children as it is Marion who is left always to pick up the pieces. Her employer, Susannah, believes in her singing ability and drives Rose Lynn to take a big step towards fulfilling her ambition. Again Buckley and Okonedo combine to give performances of real substance.

The dream of becoming a singing star from unpromising beginnings is one which is far from novel in the cinema. What gives this film its strength is the everyday challenges which Rose Lynn faces as a mother of two kids without any money with her own mother Marion trying to give the two kids some sort of security. Marion is ‘put upon’ as she carries out this task and is openly critical of Rose Lynn and her behaviour. There is nothing glamorous about this background mother and daughter story. As a mother, Rose Lynn consistently fails her kids and it is Marion who picks up the pieces.

The acting of Walters, Okoneda and Buckley is one of the pleasures of this film. However, it is Buckley’s performance whether as a failing mother, bolshie drinking companion, unconventional cleaning lady but most importantly as a singer which steals the show. She has dramatic presence and in Rose Lynn she has created a character of substance.  It is a film that brings you on a gritty roller coaster. Sit back and enjoy.