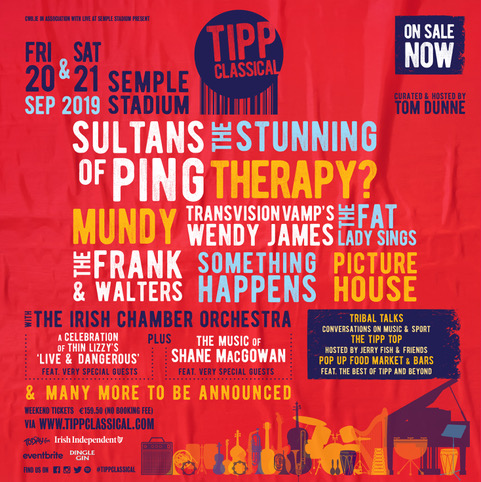 TIPP CLASSICAL – Harking to Feile days, but with a mix of contemporary Irish artists performing with the Irish Chamber Orchestra, this 2 day festival, is a real celebration of the best of Irish music back on hallowed Semple soil! Tom Dunne returns to the helm as chief organiser.

SULTANS OF PING / THE STUNNING / THERAPY?

All performing with the Irish Chamber Orchestra

Thanks for agreeing to do this.  So you’re back with another year of Féile.  Is there a name change this year?

There is, it’s gone to Tipp Classical.  I’m not 100% sure what the reason is, I think they have to put a bit of distance between themselves and Féile!  It’s fine, it’s the same thing in the same place.

Is there a second day this year?

There is, Friday the 20th and Saturday the 21st of September.  We don’t have a running order for each day, we just have the bands, with more bands to be added.  It’s a labour of love. It takes time to fit one into the other, who goes where and all that kind of stuff.  It’s off to a very positive start, I’ll put it together over the next couple of months.

I’m the curator.  I’m picking the bands and slotting them in.  It takes a loving touch!

Do you have to have played the original Féile or does it just help?!

No.  For instance we were trying to get Aslan, but I think they have a date that clashes unfortunately.  Trying to work around it. But they never played because Christy (Dignam) had left, was kicked out in… god, I think it was as early as ’87, ’88, before Féile kicked off.  Had he not been kicked out they would have been stalwarts of it. There’s loads, for instance Damien Dempsey did a set last year – he would argue he wasn’t born back then!  He’d be lying. Once it fits in, it’s a type of act, they’re real bands who write their own songs all that kind of stuff. That’s the main thing, but having played Féile helps enormously.

Irish people have got quite used to going to festivals, they’re used to multiple stages, different things happening outside of the music.  Is Tipp Classical primarily about the music or will there be other stuff happening?

Everything else is happening that you’d associate with a festival, there’s great food, great drink, there’s different gigs going on, there’s bits of comedy happening, Jerry Fish is doing the tip top tent, Dingle gin, eco glamp site, all those kinds of things.  Expectations have grown with festivals which didn’t exist during the original Féiles. I think the thing that was so brilliant about Féile was that it was in the stadium in the middle of Thurles, a quiet country town. A stadium that would normally be full of hurling heads.  It can’t let that go, it needs to hold on to that. The bands are from the era, the people are certainly from the era. So the occasional triangular ham sandwich doesn’t go amiss! It does have a nostalgic feel to it. Thurles hasn’t changed much at all in the meantime. It hasn’t been bulldozed and replaced with an outside of town supermarket.  It’s still lovely and quaint, there’s that sense of being away from the rest of the world, almost going back in time when you go into it.

It was very special last year, everyone loved going to it.  We were talking to people in the hotel, some people had come over from Japan… a bit of it was that occupied a very special place in people’s hearts.  A lot of them had gone out for the first time, it was their first festival away with their mates. I always said it was like the Gaeltacht… away from their parents for the first time.  So hooking up with your friends 25 years later… it’s lovely.

Have you any stories from Féile that you haven’t told anyone else?

The thing that was odd was that we were touring outside the country.  Ireland had never had a three day festival before. So we flew into Dublin Airport and to us it was just another gig, we had gigs in Holland, Belgium and England, now we were flying in for another one.  On paper it looked exactly the same as every other gig we had done, you arrive into an airport, you get in a car, you go to a stadium, you go backstage and soundcheck, you wait and you do a gig. So that just felt normal.  Except because it was Ireland we were all left to drive ourselves so that we could see loved ones. So I drove into Féile in my old trusty Renault 5, and it was only when I arrived that I realised the size of it. You couldn’t drive up Thurles main street because it was just full of people who at three in the afternoon were already locked!  I’ll never forget that. I had no laminate, I had no ticket, I had nothing to indicate I was in a band. But they were recognising me… people banging on the car to say hello. I just got up to the main gates, beeped the horn, the main gate opened, a guy came out and I said “I’m playing”. He said “ah yeah, in you go”. I just drove in and he said “throw it up there on the left” – I threw the car up, went backstage and off we went!  Then we started realising that we knew all the other bands – The Hothouse Flowers and The Stunning who were mates of ours. It was very exciting, there were things going on we’d never seen before. There was a backstage performance area and after you did your gig you’d go and do a small gig for the other bands and their friends. So that was really special. I got to see Paul Brady performing in a tiny tent and he was spectacular. There was a feeling of being a bit of a charlatan, looking at Paul Brady thinking: he’s famous, we’re not famous, we have two singles out, that’s all we have.  And look at him. It felt very special.

Then on the second day Van Morrison was playing and we just hung around, we weren’t even playing, and he ordered the backstage area to be cleared out before he would go to his dressing room.  We couldn’t be cleared out so we got locked in our dressing room, not allowed out of it! That’s PROPER stardom. If we ever get really big this is what we have to do, announce backstage has to be emptied.  It was brilliant. We stayed down in a hotel in Cashel, Van was having breakfast at another table and Wendy James from Transvision Vamp was there. The gig was sensational, Parachute was just out, so it was really a great time for us.  We were also very road-hardened, we had done probably 100 gigs that year (1990) easily, so we were tight on stage, we knew what we were doing. Afterwards we walked off stage and Denis Desmond said to me ‘I think you stole the show there man’.  I just felt ‘now is the time to be alive’.

Very few shenanigans, all that Guns ‘n’ Roses stuff didn’t really exist, it was just Gaeltacht kind of stuff.  I went out front to watch The Four of Us, I didn’t have a laminate, laminates hadn’t been invented. So I just had to say to the guy “remember me?”.  So he let me back in. People said to me “that was a great gig Tom”, nothing over the top, congratulating me. Very Irish, just the way we are here.