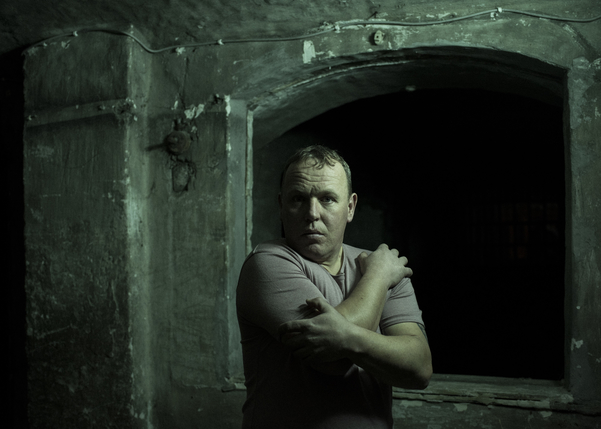 This is a new work by Brokentalkers which explores prison life in Ireland. We meet two individuals with differing views of the world. One is a recently released prisoner and the other is a man who was violently mugged. They offer two sides of the argument.

The production starts with Gary Keegan telling us about the ‘science’ of the born criminal. It is an idea proposed by Cesare Lombroso in 1876 that states that criminals are a subspecies of humans and could be identified by the features of their faces. The idea was further expanded to give details of what features you could expect of an individual who committed a particular crime. Murderers have cold, glassy stares and rapists have jug ears!

On the other side of the stage there is a man in a gorilla suit. For the purpose of the production, this is our ‘born criminal’. The man in the suit is Willie White, who is a comedian discovered by Des Bishop during his TV show ‘Joy In The Hood’. The show ran stand-up comedy workshops in some of the most impoverished locations in Ireland, including Ballymun where Willie lives. Willie talks about the experiences of some inmates, including slopping out in the mornings in prison, where the inmates have to queue to empty their chamber pots. It is a degrading act that clearly should not be still taking place, but many of the prisons do not have proper toilet facilities, as they were built in the Victorian age.

This production was a long time in the making. It was created from a series of interviews with prisoners and former prisoners at a variety of locations including Mountjoy prison. Other segments were taken from a number of academic studies. It is a difficult topic to make a piece of theatre out of and the subject matter is quite dark at times. There is not as much humour as you would normally associate with this theatre company. Gary Keegan is guarded and controlled in his role as devil’s advocate. Willie White plays a man who feels he hasn’t been given a fair chance in life. It’s a work that opens a difficult debate on how we as a society treat our lowest members.